Originally meant to be an immersive theater experience, Eschaton now works as a virtual nightclub on Zoom for an online audience. 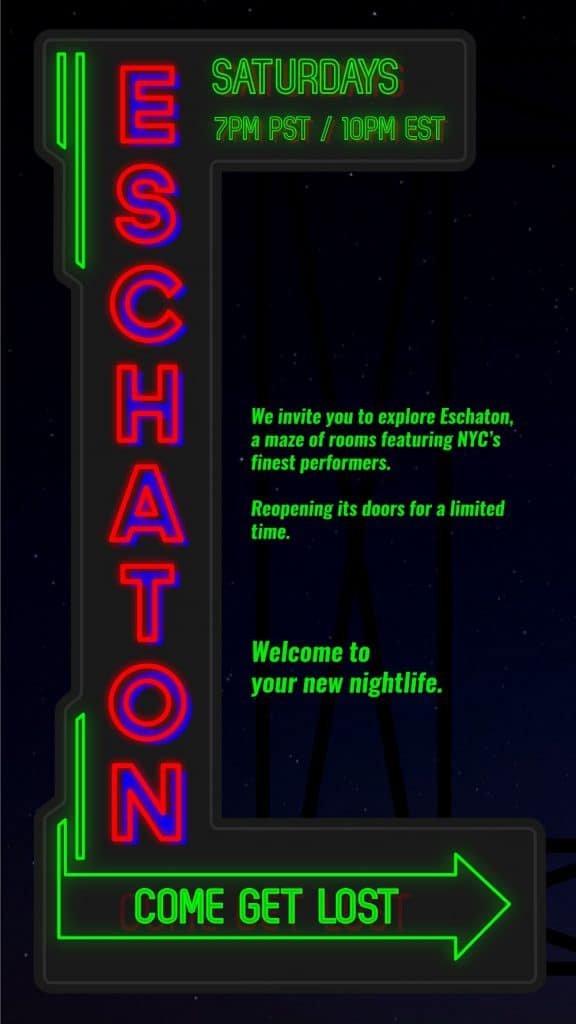 Eschaton from Chorus Productions is a one-of-a-kind part theater, part nightlife simulator, and part blind-date-video-chat room, taking place every Saturday night on the video conferencing platform, Zoom. The experience starts off with a $10 ticket and conveys the illusion of a maze of interconnected rooms arranged across three floors. Complete with a basement for a crew of assistants lurking in the margin, providing tech support and nudging guests towards hidden surprises, performers live-stream their solo contributions – ranging from a giant rat performing a striptease to the soundtrack of a lecture on Taoism; a woman performing a Cabaret number in a cramped New York apartment, to a girl strumming a viola and telling explicit jokes. The audience tuning in are encouraged to dress up, dim the lights, and pour themselves a drink with while their webcams can stay either on or off. Lasting about an hour, audiences can interact with the performers, crack a clue, and solve the puzzle of a story. Or, they can even wander from one virtual room to another, taking in the fragmented and non-linear variety show aspect of it. 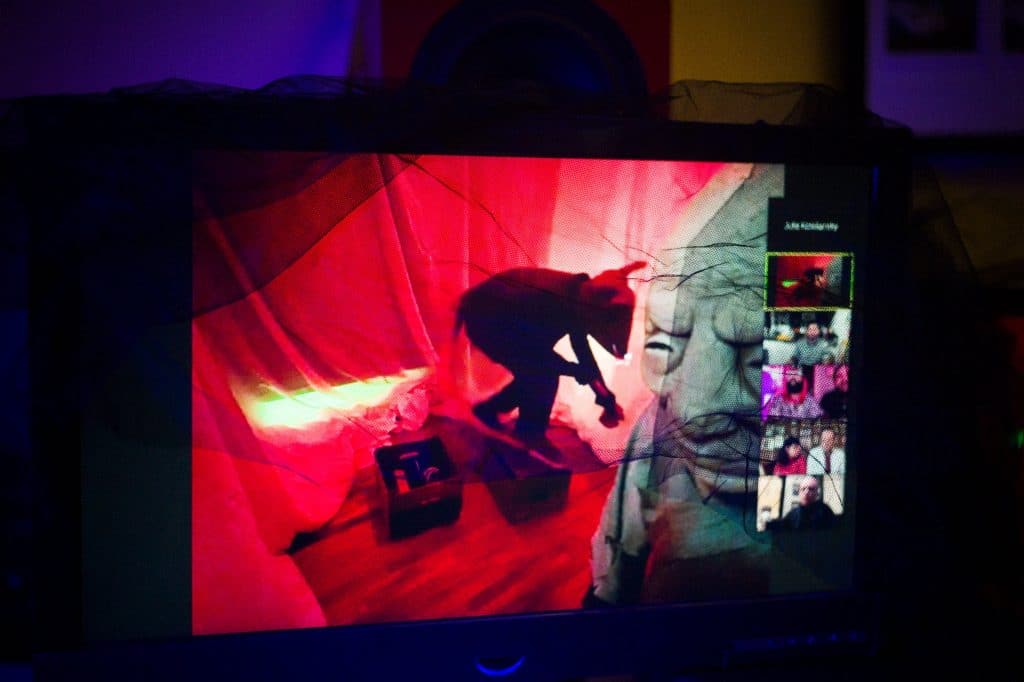 Jonothon Lyons dressed as a giant rat, preparing for the strip-tease. Image by Ioulex for The New York Times

The experience plays off of the strange intimacy of group video chats where everyone can know the names of everyone else and look into each others’ homes— albeit through a screen— and once someone enters a chat room with just a few people, leaving the performer to an empty live-stream becomes awkward. The ‘mysterious’ nightclub setup makes Eschaton something more than just a string of live-streamed performances where despite the rooms and costumes being contemporary, it gives off an odd ‘retro-futurist vibe’, reported The Verge.

Eschaton was conceived by former actor, Brittany Blum, and fiction writer, Tessa Whitehead as a real-world immersive theater experience along the lines of Sleep No More and Then She Fell. The show had been developing for several months when Whitehead had already written five scripts, Blum was looking for real estate options and the cast was preparing to play the tortured denizens of a nightclub. The title, “Eschaton” is a theological term for the end of the world and was chosen to fit the broad theme of the play: the performer’s existential need for an audience, and the precariousness of life in the spotlight, that is, until the coronavirus pandemic put an all-too-real reminder of the same precariousness. 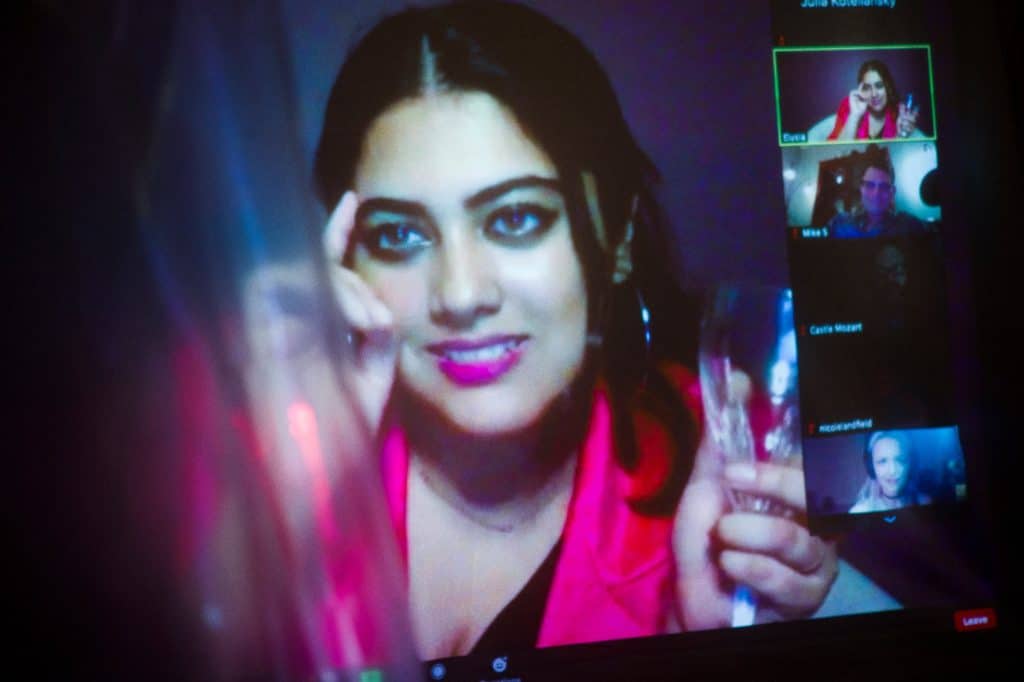 “We had to cancel our first table read… we weren’t sure immersive theater would exist anymore,” said Whitehead. “And if it did, what it would look like.” While quarantined, they wondered what a virtual version of the show would entail and whether they could translate the unbound feeling of immersive theater into something online with the confines of a computer screen. “During quarantine, we felt that audiences needed that type of entertainment, a world they could get lost in and escape the reality they’re in. We simply met the audience where they were: online”, informed Blum to The New York Times.

They began by enlisting Sleep No More performer Taylor Myers as director and the tech studio BENBENBEN to create a digital lobby in the form of a password-protected website accessible only to ticket buyers and drew on additional inspirations like video games, augmented reality games, and online escape rooms. “We had no idea how long quarantine was going to last,” informed Whitehead, “so we gave ourselves two weeks to put something together.” They then redirected what would’ve been their real estate budget into recruiting and paying as many kinds of performers as was possible and the cast grew from five to twenty-six including several alumni from Sleep No More and Then She Fell. 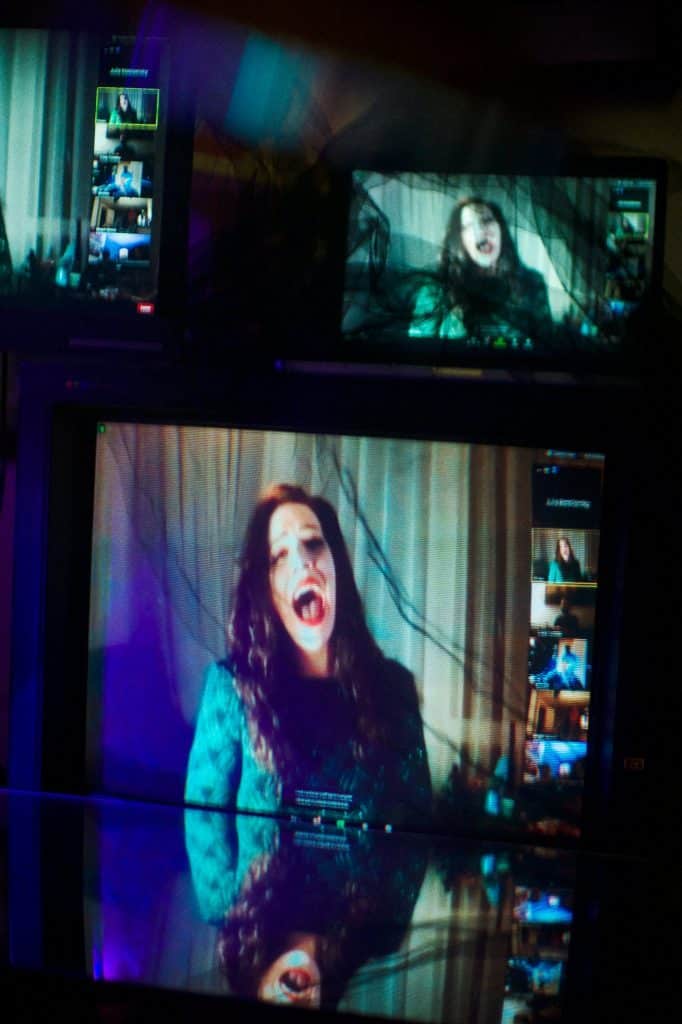 Host Amy Jo Jackson to bring the quality of Sleep No More to the Eschaton experience. Image by Ioulex for The New York Times

There is no specific narrative to Eschaton, but there is a sense of progression. Once a few minutes have been spent in a particular “room”, a chat message with a list of room titles and one-word abbreviations such as BOILER, ACID, SLICE appears. These little nuances evoke the sense of both uncovering a mystery and sifting through a unique dark web, reported The Verge. 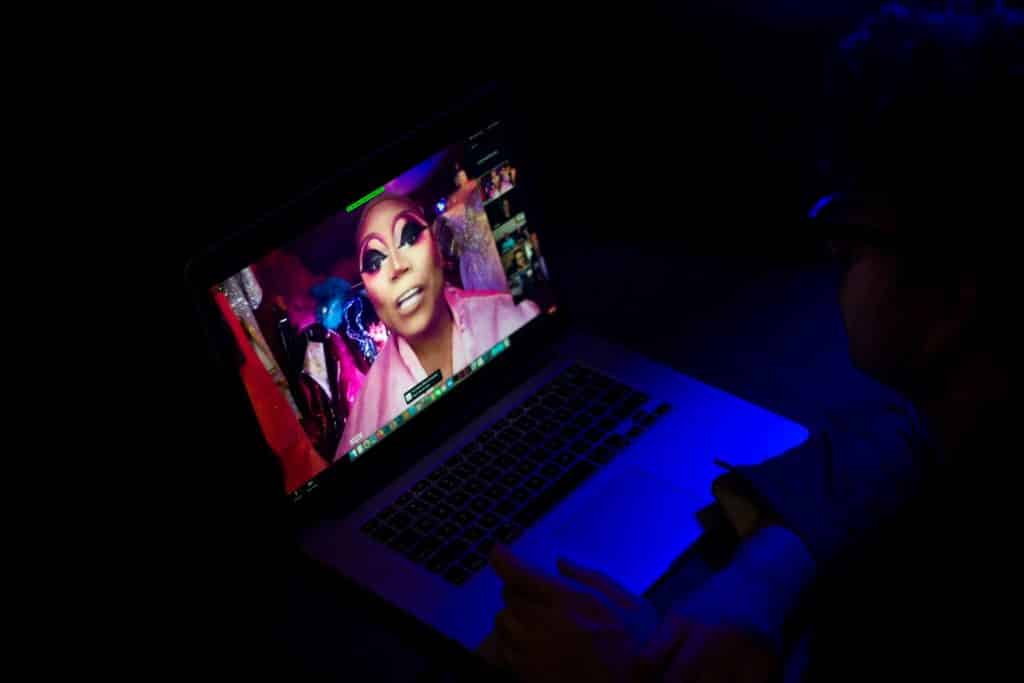 Drag Queen Brita Filter was a guest performer in one of the “rooms”. Image by Ioulex for The New York Times

Though the show has become a hub for immersive entertainment audiences even in Germany, Japan, and Spain besides the US, the future of Eschaton remains unclear. In a world like the present, where fun is difficult to find, the experiment has worked wonders and Whitehead has kept writing to weave in more intricacies in the narratives for the audience to either untangle or get tangled up in. “Each week there’s more to discover, more drama to be mined,” said Whitehead. At $10 a ticket, the creators hope that some guests might be inclined to return for more and the show would take the form of episodic television.

Besides the more mysterious delights, there have also been one-off delights – including one where an audience member had a pizza delivered to her real-world doorstep. There are still more ideas the creators want to experiment with. “It’s almost like we’ve stumbled upon a new genre of live entertainment,” said Whitehead.

Sleep No More performer Mallory Gracenin hopes that, even when theaters reopen, Eschaton will carry on – both virtually as well as physically. But she is particularly looking forward to a time when performers and audiences can coexist in person. “It’s going to be really nice to hug a fellow performer,” she said.