The Aeolian islands in north Sicily, Italy, is one of the world’s most frequented archipelago known for its impeccable beauty. Of the seven islands, Stromboli and Filicudi are addressed popularly as “fertility atolls” and have become a sex pilgrimage site.

Located in the Tyrrhenian Sea, these volcanic islands in the Mediterranean are said to have aphrodisiac powers. People believe that the scenic beauty of the two islands – covered in grottoes, libido-inducing flora, and the constantly erupting volcano makes it a sensual place. Titillated tourists from around the world visit the islands to enjoy each other’s company in the enticing environment.

Locals widely attest to the aphrodisiac influence of Stromboli and Filicudi and reckon it to be a ‘sex pilgrimage’ for those seeking a new partner or a sexcursion. In a conversation with CNN, Luisa Paduano, owner of a local seafood restaurant, said, “So many singles who meet here for holidays end up falling in love and return to celebrate their wedding or their child’s birth.”

Stromboli, also known as Black Giant, is one of the world’s most active volcanoes, which erupts every 15 minutes. One can feel the earth rumble and vibrate beneath them, ‘like if the volcano explodes in your body’. The groundwater underneath the volcano emits heat onto the road and sidewalks of Stromboli through tiny air bubbles. It incites hiking couples to strip themselves naked due to the heat and also lay down on the ground to feel the quivering earth on their bare skin.

Image Via The Globe Trotting Detective

Locals call the Black Giant a ‘Naughty Boy’. Maria Puglisi, a local wine trader, told CNN, “It’s an orgasmic experience, a ritual that ignites passionate sex. The heat and volcanic beat get into your blood and trigger this sexual vibe in the air. The volcano is alive, we call it “Iddu” (him), and he’s guilty of turning folks on. He’s a naughty boy.”

You May Also Like: Surrounded Islands: An Epic Art Installation In Miami

‘Lady of The Night’

The island is also home to a Cestrum Nocturnum, also called ‘Beauty or Lady of The Night’. This greenish-white night-blooming flower is said to release libido-boosting that enhances the sexual prowess or desire of those around it. Apparently, the hypnotic fragrance helps couples conceive.

“Its fragrance is so strong, so overpowering, that it can cause a pleasant dizziness and it lingers until the first hours of the morning,” said Luisa. She added, “Cestrum nocturnum has been considered an aphrodisiac plant; it boosts romance and lovemaking.”

The Scenic Beauty of Filicudi

While love was in the wind and tangible on the earth in Stromboli, Filicudi has many aphrodisiac sites to visit. The island has ‘phallic sea stacks and secluded grottoes’. According to the locals, couples or single people visit the site to have intercourse and often end up conceiving. 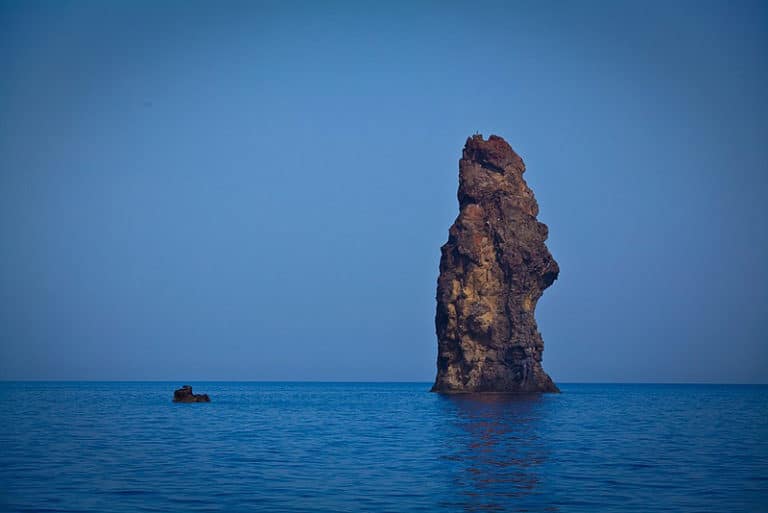 Image via The Siciliy Islands.

Local fishermen drop off couples or single people looking for partners at the “fertility caves”. Residents believe that these secluded grottos “drive hormones wild and blind people with desire”. Some services let single women touch the phallic rocks ‘to offer luck in the search for love’ in a boat tour.

“One such rock, shaped like male genitalia, is said to bring good luck: girls who stroke it will end up finding a guy, get married, and have lots of kids,” remarked a local diving center official. This massive rock called La Canna, meaning “rod” or “cane”, stands 278 feet tall.

This article is part of TFword’s Where In The World Series, find the previous article from the series below!

You May Also Like: Mexico Opens Immersive Exhibition For Frida Kahlo