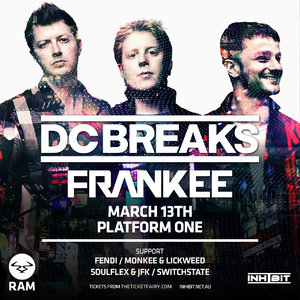 Championed by Annie Mac, Chase & Status, MistaJam, Sigma, and many more, DC Breaks are the next drum & bass duo tipped for huge crossover success. Released on RAM Records, ‘Breathe’ (feat. Dave Gibson) is the pair’s forthcoming single. Currently tearing up dancefloors via major club support from Andy C, High Contrast, Teebee, Danny Byrd, and Matrix & Future Bound, ‘Breathe’ will be released in December ahead of their new artist album due in 2016.

All the signs of DC Breaks impending breakthrough are there: a series of huge club singles (‘Faithless’, ‘If This Is Love’), sold out shows across the UK and Europe, with headline festival slots including Glastonbury’s Arcadia stage, an overflowing, packed out tent at Bestival alongside Hudson Mohawke, plus mainstage performances at EXIT, Melt!, Dour, SW4 and Tomorrowland.

DC Breaks’ remixes for the likes of Lana Del Rey, Tinie Tempah, Seinabo Sey, Lady Gaga, and Paloma Faith, have kept their (sought after) production hands in the mainstream, the flipside to having numerous Beatport genre No.1s and over 40 underground cuts to their name.

DC Breaks aka Dan Havers and Chris Page met and raved together at Edinburgh University, bonding over the Prodigy and the warm glow of a post-jungle era that had breathed new life into UK electronic music. After graduating and finding success North of the border, their first studio was housed in the basement of a Bristol city centre warehouse, a desolate location that doubled up as their home, initially without electricity or running water.

This dedication paid off and success started to show, with cuts such as the tough sci-fi sounds of ‘Halo’, ‘Romper’ and ‘Taken’ on Futurebound’s Viper imprint and the RAM sub-label Frequency. Once they graduated to RAM itself, with cuts such as ‘Shaman’ and last year’s battering ‘Lock-In’, they hit the drum & bass A-league. Before long it wasn’t just the drum & bass scene paying attention. DC Breaks tunes made it onto BBC Radio via Zane Lowe, Mistajam and Annie Mac.

If DC Breaks can avoid being fried by flame-throwers, the summer will be theirs. By the end of 2016, with their debut album blowing up everywhere, the year might well be too.

David Franks otherwise known as Frankee is part of a new wave of producers to hit hit the scene in recent months. Although a new face to many, Frankee’s history spans back more than a decade of dedication and hard graft from when he was first introduced to Drum & Bass via his older brother at the age of 13.

D&B, Garage, Jungle and Hip Hop dominated the household sound system with a pinch of Rock & Roll and Reggae chucked in the mix from his parents. Taking an early interest in this, Frankee went on to own his first set of 1210’s when he was just 14 and started spinning vinyls at home as well as at at a local youth club where he could share and express his interests.

Moving swiftly on, enjoying playing what he loved, Frankee’s next step was to see if some of his own musical ideas could come to light. At the time of his coming of age he took the leap into production. Many a year passed in the lab concentrating on all the key factors of producing a great song until he was 22. Things stepped a gear at this point as he began to concentrate heavily on his production. This eventually lead to a collaboration with friend and D&B don Basher.

Together, the pair produced the ever so popular track ‘Nevada’ which, after sometime, made it onto Basher’s ‘Transmission’ album. Bearing this in mind, Frankee had now gained recognition within the Ram Records circle and in turn gave him the confidence to hand a demo of his works to the 3 top players at Ram HQ, including Andy C.

Just two months passed until he got the phone call from Ram offering this versatile producer the premier outing on their newly formed sister label, Program! After two critically acclaimed releases on program, 2013 saw Frankee exclusively sign with Black Heart & Wonderland on Ram.

The future is set to be bright for Frankee, as he continues to appear at shows from the UK to Europe and now Australia & New Zealand, taking his sound to the masses.