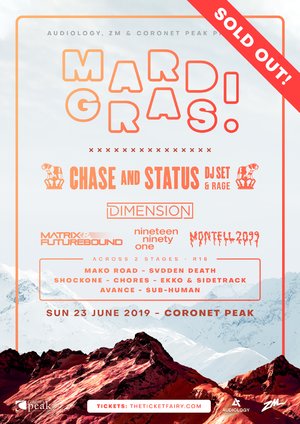 Mardi Gras 2019 - being held in both Ohakune and Queenstown this year - is shaping up to be winter’s premiere music event, with more international names just added to the bill.

The extravaganza is returning to its longstanding home of Ohakune on Saturday, June 22, with the party also debuting in Queenstown for the first time on Sunday, June 23. Tickets to the Ohakune event have already sold out, and there are limited numbers to the Queenstown event.

This year’s Mardi Gras, presented by ZM and Audiology, features A-Class acts in both locations, with the second line-up announcement including Dimension and 1991 from the UK; Svdden Death from the USA and EKKO from Australia. See below for more information.

Mardi Gras, which takes its ‘street party vibe’ from famous Mardi Gras-style events around the world, is a colourful and fun-filled event like no other. It has a long history in central North Island winter resort of Ohakune and after a one-year hiatus, it was revamped in 2018 by Audiology (one of the promoters behind some of NZ’s biggest festivals, including Bay Dreams, Soundsplash and One Love). Last year’s event proved so successful, promoters are now extending the love to one of the country’s most picturesque and popular winter wonderlands - Queenstown.

Dimension - Hailing from the UK, electronic music producer Dimension (Robert Etheridge), is a man of few words and lets his music do the talking. Striking the perfect balance between club and radio, Dimension distinguishes himself through his passion for bold design, sleek aesthetic and theological themes.

1991 – London-based DJ and producer 1991 (Fred Webb), is one of the most exciting newcomers on the UK dance music scene. Known for his drum and bass productions, 1991 has received massive radio support and club support by artists like Skrillex, Pendulum and Chase & Status.

SVDDEN DEATH - With a scene that’s constantly changing, SVDDEN DEATH (Danny Howland) has risen through the trenches and stirred the bass community. SVDDEN DEATH has formulated a hybrid of textured rhythms and sub-wrecking basslines to create his own maniacal sound.

Ekko & Sidetrack - Australian brothers Jeff and Johnathan Hansen aka Ekko & Sidetrack, have been turning heads around the world since 2018. With their songs causing explosive euphoria throughout the land - the brothers have secured a global fanbase of both punters and high-profile artists alike.