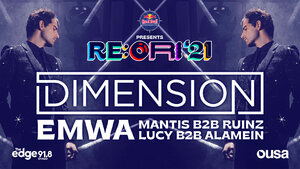 We’re super hyped to bring the London heavy weight, Dimension to Dunners for a HUGE Wednesday night show 🤩
Re Ori Combo Passes are available - secure your tickets to Dimension as well as Lime Cordiale and Wax Mustang & Mild Orange + save some hard earned student allowance.

Robert Etheridge aka. Dimesion is one of the UK’s most unique electronic music artists. Defined by a clear aesthetic that bleeds through into his music and imagery. He broke onto the global stage with ‘Desire’, his collaboration with Sub Focus. Having sold out tours across the UK, Europe, North America, Oceania and Japan, he’s bringing his sow back down south to Dunners 😈

One of the biggest acts we’ve ever had for Re:ORI, you don’t want to miss this one, which is sure to sell out quick 🤐⏱