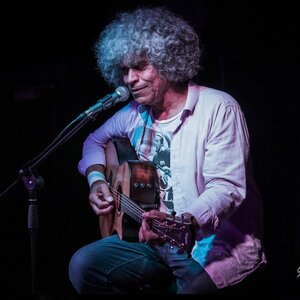 Paul Ubana Jones, Swiss English musician, was born in London to a Yorkshire mother and a Nigerian father, He was playing guitar by the age of 11. This was the beginning of a four-decade career that would see him crossing continents and recording eight albums.

Gaining a scholarship for music college, he studied guitar, cello and composition but Paul also began to forge his own contemporary style, influenced by blues, rock, folk and jazz, which he has developed over the years. Shortly after graduating he spent a year in The US.

In 1980 Paul came to play in Switzerland and fell in love not just with the country but he also met his Swiss wife and moved to Zürich. It was here that his real musical career began. He quickly became fluent in Swiss German and he built up a busy touring schedule through Folk Clubs and other music venues in Switzerland and played among others The Nyon Folk Festival (now called Paléo), the Gurten-, and Stimmen Festival. Paul and his wife also became parents to two children in Zürich and Paul gained Swiss citizenship.

Over the years he was commissioned by the Erziehungsdirektion Zürich (Ministry of Education) to hold several hundred music workshop in schools and also workshops for QUIMS schools (Multi Ethnic Schools) with great success. His touring area widened to Europe, Australia, the USA and Canada .

In the late eighties, Paul and his family moved to New Zealand, where he still has his official residence. He continues to perform regularly in New Zealand, Australia, and internationally. and him and his wife return every year to Switzerland to play some concerts and workshops, see his many Swiss friends and their son who lives in Bern as well as a bit of hiking. Over the years, Paul has shared the stage with various artists, including Taj Mahal, Keb Mo, Norah Jones, Bob Dylan, Tuck and Patti, Crowded House and many others.