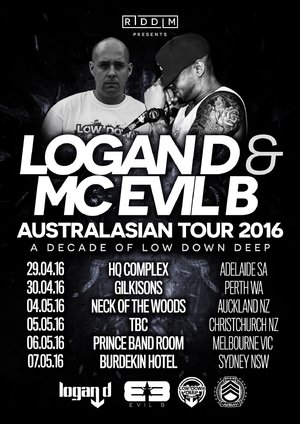 Following up from DJ Guv we have another suprise for the Sydney Jump Up heads...

Label mogul, party promoter, razor-sharp selector: Logan D’s entire life is fuelled by drum & bass… And has been for as long as he can remember. Brought up on a strict diet of dubplates, he could lock down full throttle breakbeats on the 1210s before he was even in high school. By the time he was 14 he was maintaining tight shelf vibrations at his local record store Boogie Times. By 15 he’d become a regular face on renowned pirates such as Conflict and Pressure FM. By 16 he was a card carrying member of the Kool FM roster. A position he held for nearly 15 years.

From airwaves to airlines: word of Logan’s reputation swiftly spread. Quickly developing a spotless international DJ profile, since 18 he’s been regularly checking in across the world. From Kazakhstan to Canada, Austria to America, he’s smashed the dance on every booking. Armed with an innate ability to tease any crowd across the globe, his distinct blend of strong-arm, bass-bolstered jump-up ensured repeat visits… And continue to do so to this day.

Not content with just being a DJ, Logan’s love for the scene soon found him establishing Low Down Deep Recordings. Now nearing a decade of consistent releases, Low Down Deep quickly became a solid platform, preaching the good word of fellow luminaries such as Pleasure, Pasco, Sly and Logan’s long-standing party partner Majistrate. Scoring props on every release, it recently achieved second place as Best Label in the Drum & Bass Awards 2013. The legendary Ram Records came first.

Big brand development followed: Low Down Deep is no longer just known as an unfailing label but also one of the most reliable, exciting D&B party promotions in the UK. Quickly outgrowing its roots at the 300 capacity Herbal, Low Down Deep sessions have elevated to 2000 capacity venues such as Bristol’s 02 Academy and London’s Indigo2. The first DJs to embrace the MC-born culture of birthday bashes, Logan and Majistrate’s Easter bank holiday rave-ups are genuinely stuff of scene legend.

There’s more… Logan has also amassed a stunning audio armoury. Responsible for the distribution of myriad labels, anything you hear on Urban Takeover, Sweet Tooth, Dubz Audio, Higher Stakes, Subway Soundz and Killer Bytes has been serviced through Logan’s digital team. Frequently adding new labels to his roster, Logan has made drum & bass a round-the-clock occupation.

We told you he was dedicated…

Critics claim that Evil B has radically changed the face of Drum & Bass mcing. The North London born UK rapper who’s aggressive growl and tone gives him a distinctive sound recognisable as soon as you hear it.

Flows, metaphors, similes, patterns and wordplay usually only synonymised with hip-hop, have now been brought to the forefront of Drum and Bass.

Also known under his UKG/Grime alias as B Live he is the most recent winner of the infamous Sidewinder BEST MC award and has collected this accolade 4 times in a row….but the focus is different now.

The live performance aspect being the ultimate place to display his work , he is also now constantly in the studio recording new material and if the HBS series is anything to go by, 2016 is set to be a very big year for Evil-B.