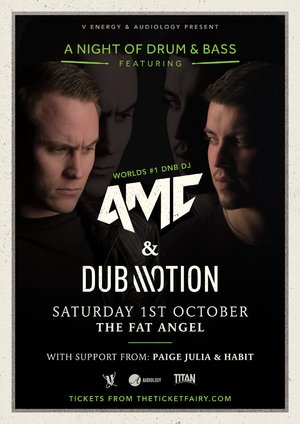 A Night of Drum & Bass finally makes its way to Wellington!

No better way to launch than featuring the worlds #1 DNB DJ as voted in the 2015 Czech DNB awards, with his label mate.

Yes, PROPER SOUND will be installed.

Plus a 174bpm local line up including:

A.M.C Titan Records CEO is without a single doubt the most impressing dj-talent to emerge from the UK in recent years.

He was discovered by the gang behind Drum&Bass Arena, still the world's biggest online drum&bass community, and he was made resident of D&BTV when it first came about.

Subsequently in 2010 he won 'Best D&BTV Live Set' and repeated this a year later while also winning 'Best Newcomer Dj" in 2011.

Even though he is heavily into producing these days, the main focus is still on his dj sets: big combos, astonishing double and triple drops, speed mixing and combining classics and dubplates: he does it all.