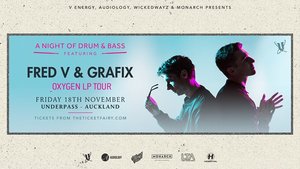 A Night of Drum & Bass featuring..

With top notch local support from..

Friday November 18th
10pm 'til as late as they let us

Fledgling stars Fred Vahrman and Josh Jackson a.k.a Fred V & Grafix signed to Hospital at the end of 2011 and have been making waves ever since with regular appearances on BBC Radio 1Xtra and mini mixes on Annie Mac's show. A pair of producers who have been working together for the past five years now and showing huge promise, the boys brought us an abundance of musical gems before they delivered their debut EP on Hospital in March 2013.

Since signing to Hospital, Fred V & Grafix impressed with their Sick Music 3 contribution "Major Happy" and the epic "Purple Gates" which appeared on Hospitality D&B 2013 before finally bringing us their debut solo release, the awe-inspiring "Goggles EP" which dropped in March 2013. With plenty of charisma, talent and the backing of many of the industry's key players, one thing's for sure - as we look ahead, the future is most definitely bright for Fred V & Grafix.

March 2014 saw the long awaited release of their debut album 'Recognise' which combines their love for live music, weighty sub bass and creative collaborations with newschool vocalists and producers. With prodigious song-writing, epic musicality and dancefloor sensibility, ‘Recognise’ eschews the predictable structure of todays identikit D+B. Simultaneously intellectual and effortless, it’s a breath of fresh air that builds on the success of Fred V & Grafix previous releases and includes ‘Major Happy’ and ‘We Are 18’ favourite ‘Catch My Breath’. The second single from the album 'Forest Fires' which features vocals from Med Schools very own Etherwood, was added to the BBC Radio One playlist ahead of its release cementing their cross over success. With plenty of festival appearances all over the world lined up through out the summer, don't miss out on this duos dancefloor smashing sets.