A Night of Drum & Bass ft. The Prototypes (UK) 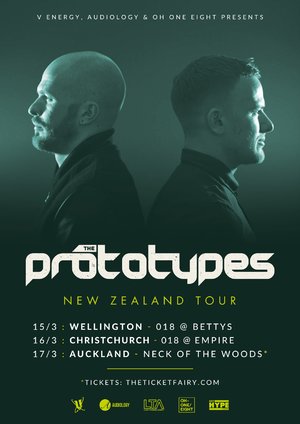 A Night of Drum & Bass featuring Viper Records very own..

With a perfectly curated lineup of local legends to be announced soon...

On sale Wednesday Feb 22nd at 7pm from The Ticket Fairy.

The Prototypes are Brighton-based producers and DJs, Chris Garvey and Nick White. Having exploded onto the scene over the past few years, and with DJ support from the likes of Andy C, Knife Party, Zane Lowe, Afrojack, Annie Mac and Krewella to name a few, there’s been no looking back for the production duo with their polished, dancefloor-destroying drum and bass.

Having made their debut on Futurebound’s Viper Recordings in 2010 with the track ‘Evolution’ from the inaugural ‘Summer Slammers’ album, it wasn’t long before The Prototypes caught the attention of some of the scenes leading taste-makers. Following their debut, The Prototypes quickly released their first single ‘Cascade’ on Infrared Records. A huge hit on both radio and across the scene, ‘Cascade’ received Radio 1 support from the likes of: Zane Lowe, Annie Mac, Annie Nightingale, Fabio & Grooverider – and was also featured on UKF’s first ever compilation album, ‘UKF Drum & Bass 2010’.
With early support from the likes of Roni Size, Matrix & Futurebound, DJ Friction, J Majik & Wickaman, Andy C, Pendulum, and DJ Fresh, The Prototypes quickly became one of the most hotly-tipped production duos in the scene.

After being featured in Pendulum’s 2010 Essential Mix, The Prototypes unleashed the vocal anthem ‘Breathless’ on Formation Records to huge acclaim worldwide. Having now cemented their place in the scene, The Prototypes signed with DJ Friction’s Shogun Audio in 2011. Wasting no time in making their presence known, the duo released their debut EP, ‘Born To Rise’, followed by the monster single ‘Pandora’ / ‘Abyss’.
The end of 2012 saw The Prototypes release arguably their biggest track to date with the big euphoric dancefloor vibes of, ‘Suffocate’ from the EP of the same name. Never resting on their laurels, they returned less than a month later with another huge hit, ‘Blackout’, which featured the vocals of MC ID reminding us “it’s time to tear the roof off”. The Brighton boys next teamed up with vocalist Takura (of Chase & Status fame) in typical cinematic fashion to produce the haunting sounds of ‘Rage Within’, one of the finest examples of The Prototypes ability to produce vocal anthems that also cause bassline warfare on the dancefloor.

Also one of the busiest production teams on the remix front, The Prototypes credits read as a who’s who of some of the biggest names in dance and electronic music. With remixes for the likes of: Avicii, Ed Sheeran, Bingo Players, Hadouken, Modestep, AlunaGeorge, Fleur, Don Diablo, Ian Carey feat. Snoop Dogg, DJ Vadim, The Qemists, Friction, and Koven – it’s not hard to see why The Prototypes have become so high in demand.

Entering into the next chapter of their careers, The Prototypes have now signed with Viper Recordings and will release debut album in a matter on months. With ‘Just Bounce’ featured on Andy C’s ‘Nightlife 6’ album last year, their first single from the forthcoming 'City of Gold' LP has just dropped. The massive 'Pale Blue Dot,' with 'Lights' on the flip, has gathered a wealth of support from DJs and fans alike. The future has never been brighter for one of the most exciting production outfits in recent years.