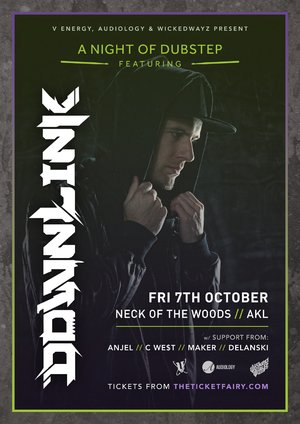 Dubstep reunion.. It just has to be done. We often reminisce back on some of the greatest parties we ever threw back in 2009-2011, and we thought "it's time to relive that shit".

Plus a 140bpm line up of goats including..

A name firmly cemented in the hearts and minds of the bass music community. He is respected the world over as a producer of the highest quality dance floor bangers. He has had numerous #1 hits on Beatport and has released music with major labels like Rottun, OWSLA and Mau5trap. He has helped mix an album for the legendary nu-metal band Korn. He has toured the planet far and wide, leaving a wake of awe-struck audiences in his path. To see him live is to witness one of the tightest technical DJ's in the game. His 4 deck live mixing and infectious stage energy light up venues turning crowds on their heads time after time. Expect lightning fast mixing on a journey through a wide variety of bass music. All tempos are fair game as long as its underground vibes and dirty bass. 2013 was a huge year for Downlink. Along with homies Excision and KJ Sawka, he gave rise to bass music supergroup Destroid, a whole different kind of live experience altogether. You really have to see it live to fully grasp the scope and intensity of the show. Also in 2013, Downlink launched his brand new record label, Uplink Audio. This will be a place where he will showcase his own music as well as a wide variety of other high grade material. Downlink is not one to be pigeon-holed and is constantly on a quest to evolve and refine his sound. With this in mind, one thing will always remain constant - a pure unadulterated heavy listening experience…