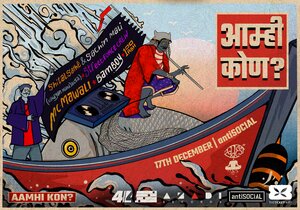 आम्ही कोण? / Aamhi Kon? is a cultural movement that seeks to reclaim the Marathi cultural identity and bring it into today's time, while addressing the issues that affect us the most. A combination of Marathi hip-hop, protest poetry, folk music, and native wisdom.

Shital and Sachin are folk musicians and Dalit rights activist from Satara, Maharashtra. They have been singing the rights tune and have been at the forefront against class-based oppression for over a decade.
https://youtu.be/YGKuRVSHDxo?t=26
https://youtu.be/0Rr5uA_rQR4?t=480

MC Mawali is a revolutionary writer, rapper, and performer. With strong views about the westernisation of Indian culture, his rhymes are socially and politically conscious with a focus on conservation. Mawali stays true to his roots and has created his own brand in the Indian hip hop scene.
https://youtu.be/5-9prsTdF3w
https://youtu.be/BudKreNtEQI?t=59

100RBH:
100RBH aka Saurabh Abhyankar is a writer, rapper, and performer from Amravati, a city from the Vidarbha region of Maharashtra. Growing up in his hometown, 100RBH was exposed to revolutionary, peace-promoting, qawwali music, among other regional stuff that became his foundation. Today, 100RBH is among the most energetic emcees and a prominent member of the multilingual hip-hop collective Swadesi.
https://youtu.be/chxAfHiePAA?t=16
https://youtu.be/MFXu45dfuwc

BamBoy:
BamBoy is a hard-hitting, razor-sharp MC, music producer, writer, and performer from Mumbai. BamBoy is most notable for creating murky bass music and groove-addled samples often intertwined with music from his roots and delivering hard-hitting truth bomb bars. BamBoy is one of the key producers and a member of the multilingual collective Swadesi.
https://youtu.be/Pk8txlvfMAI
https://youtu.be/0Xe98LnSJkM

Street Force Crew is an emerging hip-hop collective of writers, performers, and producers based out of Pune. Their debut EP Kan Agam was released in Nov 2019. The crew is currently working on their second EP Kan Agam Part 2 to be out in mid-2021.
https://youtu.be/2neXiKYI_9Y
https://youtu.be/EOrilkPS_-M

- The venue will have a maximum of 1/3rd of its previous capacity.

- Patrons have to get their temperature checked, wear a mask and have no symptoms such as cough, breathlessness etc.

- The entire venue has a HVAC UV-C system, which disinfects the air near the AC ducts continuously using UV-C light rays.

- Patrons are encouraged to reserve their tickets in advance.

- Patrons are to wear their mask at all times, except when eating and drinking.

- Contactless payment will be the preferred mode of payment

- Patrons are encouraged to stand on spots designated for them

About Swadesi:
Swadesi is a group of socially conscious rappers whose voices serve as a mirror to society. The multi-lingual crew believes in ‘music with a cause’ and goes by a sound that is traditional yet global. With their unsparing lyrical content intertwined with folk and bass music, Swadesi has created a unique sound and brand of its own in the Indian music landscape and is regarded as Indian hip-hop’s only socio-political group, that continually aims to bring about change through art and music.

The group broke into the mainstream with their debut track India 91 in collaboration with other Indian rappers in the cult film ‘Gully Boy’. MC Mawali of the group also featured as a rapper on Rajinikanth's ‘Kaala’ film soundtracks. Swadesi’s most acclaimed body of work yet is ‘The Warli Revolt’, made in collaboration with Warli tribal chief Prakash Bhoir, is a scathing indictment of the Maharashtra government’s relentless pursuit of unsustainable development.

Chetavni, their debut full-length record, saw them earn widespread critical acclaim and has seen them be nominated as one of the best hip-hop acts in the country at The Indies Awards 2020. With the world in turmoil due to an authoritarian government flexing its muscles amidst a global pandemic, Swadesi’s music has become a critical part of the socio-political discourse in Indian society.

About 4/4 Experiences:
4/4 is a subculture think tank offering consultancy and turnkey execution solutions in the fields of music, art, dance, urban street culture, comedy, and more. 4/4 strives to push the envelope by producing cutting-edge content and scaling up immersive experiences for brands, promoters, festivals, hospitality chains, music labels, and just about anyone interested in putting up a unique, quality-driven subculture experience.

4/4 was commenced by the creators of India’s only and the longest-running crowdfunded music festival (Control ALT Delete). In their world, the groove is king. They seek beauty in simplicity and effectiveness. In this abstract and often non-quantified world of what's cool and what’s not, 4/4 stands outside the marked boundaries to bring you sounds, sights, and experiences that are real, fresh, and memorable.

About Azadi Records:
Azadi Records is an independent record label based out of India. Established in 2017, the label seeks to provide a platform for South Asian artists to release forward-thinking, politically conscious music that critically engages with (and comments on) the pressing issues of our time.

Their aim is not to be underground, but to highlight pertinent stories that are often ignored by the mainstream. They are a label of the culturally conscious. The creators of stories. Explorers of new sounds, new visuals and new mediums that initiate dialogue between different communities around the world.