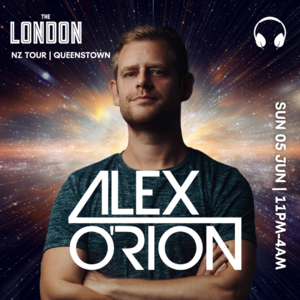 Another HUGE act who will be touring through New Zealand during his world tour, and taking us all on a mind-bending journey through sound

Alex O’Rion has evolved into one of the most significant artists of electronic music, officially ranked #3 best selling producer in 2020 on Beatport’s progressive House genre, and having his music supported by Guy J, Hernan Cattaneo, Nick Warren, CID Inc, Eelke Kleijn and many more. With @alexoriondj headlining, and the insane production we have planned, we have ourselves a second main event in one night for anyone keen to continue after The Rabbit Hole

With the borders reopening, we are beyond excited to be finally bringing you all some of the most talented DJ’s and producers from around the world to our events in this beautiful country, and we have some big announcements incoming for the rest of the year! We told you we were coming back with a bang

MPORTANT: Tickets sold via this page are for the event with Alex O’Rion ONLY, and do not include entry to The Rabbit Hole, at the Kawarau Bungy Centre. If you already have a ticket for The Rabbit Hole, you also have access to this event at no extra cost.

See you in the dance legends