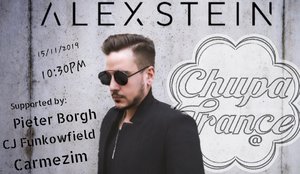 Chupatrance is proud to present our first ever international legend on Friday 15th November...

Event kicks off at @neck of the woods from 22:30PM warming up with local legends including Carmezim, CJ Funkowfield and closing with Piet Borgh 💣

With great support from locals legends

10:30 Carmezim is a Brazilian House/Techno/Psytrance project created by Igor Carmezim, who has been playing for 10 years. Using the best mixing techniques, he set up his DJ Set, composed of tracks full of groove. He has played in important festivals in Brazil, such as Universo Paralello Festival, Warung Beach, Terra em Transe Festival and has already played with big names in House/Techno worldwide, such as Louise Cut, Khainz, Alex Stein, Alok, Tocadisco, Fabrício Peçanha, Victor Ruiz.

11:40 CJ Funkowfield is a passionate party professional hailing from the sunny climes of New Zealand.

Discovering his love of electronic music in the 90’s, CJ secured his first residency at Christchurch's Heaven nightclub back in 2001. He has since become a renowned fixture in the NZ underground scene, captivating crowds across the country with his signature style.

A Funkowfield performance is carefully crafted, designed to move and elevate. Rolling basslines intersect with deep, sensual vocals, each unique journey sprinkled with sweetness, all infused with a relentless grunty, psychedelic twist.

CJ's new brand, In Kahoots, is built on his extensive industry knowledge and experience in hosting some of New Zealand's very best nights out. Founder of the legendary Funkhutt camp at Kiwiburn, his uncompromising emphasis on quality combines the highest calibre of performers with leading-edge audio and visual technologies, making his events a study in the fine art of delectably lush vibes.

Expanding his creativity into the realms of music production, CJ is also working on collaborative projects with top local producers, with forthcoming releases imminent.

00:50 Alex Stein is a true Brazilian (São Paulo) homegrown artist that has his roots all the way from the old continent, his German background compelled him day by day to work harder & harder to achieve his unique electronic sound, from an early age he knew this was the way to go. The ‘Bavarian-Brazilian’ has made his own way thru vast musical studies (including Audio Engineering, studied at the SAE Institute in Frankfurt), and much trial & error he got to where he is now. One of the most well-known and revered artists of the new Brazilian techno / techno-house scene. Also worldwide. Whether as a DJ or producer. His greatest commitment and passion has always been electronic music. Quite clear now. That he represents with all honors the new generation of Brazilian artists, too. Alex Stein begins to be in everyone’s ear beyond his South American borders, not in vain he released “Aurora” on Suara (highly respected label where Coyu is the head-honcho) as well as “Zeit EP” and the inspired techno-track “Gojira” on Oliver Huntemann’s imprint –he will publish a new EP on Senso Sounds by the end of 2018 –, the also phat production “Hostage EP” on Tronic, “El Dorado EP” via Los Angeles based Hydrozoa, “The Challenger & Escape” on the Ukrainian imprint Dear Deer (alongside K.A.L.I.L.) and “Tribute / Cruise Control” with Spuri) via Sincopat… previously in Bunny Tiger, Great Stuff Recordings, Herzblut, Tronic, etc. In all those cases he has surpassed all expectations in critical and sales. It seems he will follow the same footsteps of his friend, fellow of profession and countryman Victor Ruiz. Who is unstoppable publishing on labels such as Octopus, Terminal M and of course, Senso Sounds, and Suara. At the same time, he has accumulated an incredible legion of followers, not only in his home nation Brazil, but throughout the world thanks to performances in Canada, South Africa, Australia, and of course the main European capitals. By the way, like Victor, Alex usually spend some time throughout the year in Berlin, the ever-glowing German capital, a perfect place to continue evolving on his greatest passion: techno.

2:50 Pieter Borgh Starting his music career in the realms of the late 90's Industrial / Progressive / Psytrance era in Auckland City and throughout New Zealand.... Pieter Borgh, originally hailing from South Africa, has since ventured deep into the world of the dark hypnotizing style of Techno. Dragging himself away from the outdoor Psy vibes, determined to expand his interests, he found himself in the cozy world of clubs, helping crews, throwing parties and consistently gigging to help this boy stay on the pulse and find both new and trusted styles of dance floor ready music. Favoring a particular shade of heaving Techno, Pieter Borgh is setting his sites on new ventures, countries, crews and events to expose what this extremely talented artist has to offer. Production has always come hand-in-hand with DJing for this trooper since the beginning, over 15 years ago and his production skills are consistently getting refined. Focusing on being a DJ has been a priority in recent years but production is always ticking away under the hood.

"I believe great things are in store for this talented Producer."