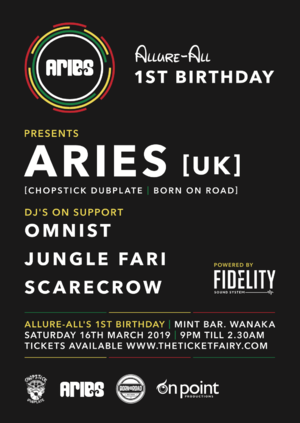 It's been a while in the making but we are stoked to finally announce the living legend - ARIES!!

We can't believe it's already been a year of madness! To celebrate our 1st Birthday, We are teaming up with our good mates from Native Promotions to bring you a sick night of Reggae/Jungle vibes with the Don Junglists known as ARIES.

We are extremely stoked to be bringing in the Jungle flavours for our first birthday with some stellar supports on the bill for a night of pure vibes.

For those of you that are true junglists and want to make a full weekend of it, There will be a show in Queenstown on Friday the 15th of March at Loco Queenstown followed by our 1st birthday on the 16th in Wanaka at Mint Bar.

We will be running a combo pass for both shows for those of you that are keen to come party with us all weekend!

Reggae and Jungle are genres of music with strong roots in the UK and Aries has immersed himself in both cultures which has heavily influenced his whole ethos to production and DJing. It is this integrity and dedication to the scene which has earned him respect amongst his peers meaning he now flies the flag internationally for modern day sound-system culture.

He broke through to the A-list of the Jungle world after releasing music on legendary record labels: Congo Natty, Dread and V Recordings, plus Aries has recorded with a whole world of vocal talent that does by no means stop at Top Cat, David Boomah, Solo Banton, Nanci & Phoebe, Demolition Man, Jah Mason and Johnny Osbourne. His DJing is in demand across the globe having played high profile DJ sets in most major countries. Aries also proudly won 'Best Jungle DJ' at Jungle Awards in 2017 & 'Best Jungle Dj' at the Drum & Bass awards in 2017.