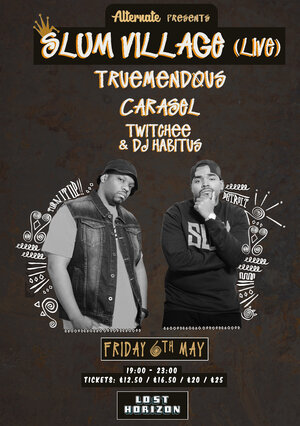 The iconic Slum Village were founded in the early 90’s by 3 childhood friends: Baatin, T3, and J Dilla, who all grew up together in Detroit.

Their debut album “Vol. 1” was recorded in J Dilla’s basement. The follow up album “Fantastic, Vol. 2” is rightly hailed as one of the most important Hip Hop albums of all time and features an A list line up including Busta Rhymes, Common, Jazzy Jeff, Pete Rock, Kurupt, Q-Tip and D’angelo. The band’s next album “Trinity” featured their first hit single “Tainted” which then included an unknown singer called Dwele. Their next big hit single was “Selfish” in 2004 which was produced by Kanye West and featured John Legend. Slum Village have toured with A Tribe Called Quest, D’Angelo, The Roots, De La Soul, Common, Pete Rock, Joey Bada$$, Mobb Deep, Erykah Badu, Nas, Busta Rhymes, Cypress Hill and many more.
This is a rare opportunity to see Slum Village perform live in an intimate venue in Bristol - Expect all the classics from over the eras.
On support is the fast-rising hip-hop MC and talent TRUEMENDOUS of High Focus.
Bristol's stalwart CARASEL, fresh off the back of his latest 'Dreams of Paradise' LP, plus Twitchee and DJ Habitus also play a stacked bill of premium hip-hop talent.
Artist Line-Up:
SLUM VILLAGE
TRUEMENDOUS (High Focus)
CARASEL
TWITCHEE & DJ HABITUS
TopInfluencers