Around The Bend With DJ T (Get Physical, Germany) + Color (USA) 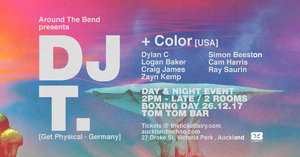 Around The Bend is extremely proud to be hosting one of the world's legends in electronic music.
DJ T. is coming to do a one-off Auckland open air rooftop club show in the beautiful area of Victoria Park.
We here at Around The Bend are busy making a super special boxing day/night party for the limited ticket holders and our crew.
World music, Eclectic electronica, beats, house and techno.
OPEN AIR VENUE !
Tickets will be strictly Limited to 400

Don't miss out on this once in a lifetime opportunity.

Read about DJ T
In today’s electronic music world there are not many artists who can lay claim to a legacy like that of DJ T. (real name Thomas Koch). Born in Dusseldorf, his parents’ record collection inspired DJ T.’s love affair with the hypnotic grooves of disco during his formative years. He began an obsessive quest to collect music, feeding his soul with everything from disco and hi-nrg, through to early hip-hop and electro, soul, funk and R’n’B. The groovy, infectious rhythms of all those genres continue to permeate into the music he makes and plays today.
The late 80s were a pivotal moment as acid house swept through Europe, landing in Thomas’ new home of Frankfurt, and taking over with the launch of Sven Väth’s legendary Omen club in 1988. The first wave of house and techno took hold and T. was there at the forefront, absorbing all the fresh new sounds from Chicago, Detroit and the UK. He picked up a residency at the infamous Music Hall and held residencies at countless clubs across the city during the next 10 years from Plastik and Dorian Gray to The Box. By the end of the nineties, he was one of Frankfurt’s best-known selectors.
In 1989 DJ T. tapped into another side of his creative energy to set up Groove Magazine. Under his leadership, Groove became one of Germany’s premier dance music publications, and remains so today. With his experience gained under the Groove Magazine banner, DJ T. then went on to launch the club, Monza, in Frankfurt. He also invested his skills and knowledge into conceiving Get Physical – a label which remains one of the world’s best-known house and techno platforms. Though he left in 2010, T. still is involved in A&R for the label.
Production-wise, DJ T. has been consistent ever since his debut release, the ‘Monsterbaze’ EP with Steve Bug, released on Poker Flat in 2000. Since then, T. has released several well-received EPs, a slew of remixes and three albums, ‘Boogie Playground’ in 2005, ‘The Inner Jukebox’ in 2009 and ‘Pleasure Principle’ in 2011. His special touch has also been employed by numerous labels to curate compilation mixes, including ‘United Under The Ball – 30 Years Of Disco’ in 2011 and ‘The House That Jack Built Vol 1 & 2’ in 2012. With hot new releases on AUS Music and Moon Harbour, DJ T. continues to push his creative boundaries.
DJ T.’s reputation for being a master selector has been cemented by his superlative collection of music. A highly-skilled DJ, producer and an A&R rep with an uncanny ability to discover new talent, DJ T. is a master selector and one of the industry’s most influential figures.

Kiwi/British Colombian/Californian hottie, Color will be playing her twisted for of booty house with crossed over tech and Detroit synths added into the mix of our already amazing line up.