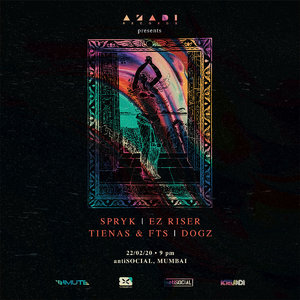 TICKETS AVAILABLE ON THE DOOR.

Azadi Records presents is a monthly property that seeks to introduce and showcase artists that the label engages with outside the hip-hop space.

Every month, a diverse roster of acts showcasing different sonic landscapes and communities shall come perform under one roof and hope to introduce their fan bases to other vibrant scenes developing in their cities.

Spryk is the electronic music & art exploration of Mumbai based Tejas Nair. Whether its immersive art installations, awe-inspiring Audio Visual Live performances, ambisonic sound for VR & video games, or club-ready releases, Spryk’s work is a classic case of electronic exploration that makes use of available technology while referencing that which came before it and does so in a sincerely human way.

The Mumbai-based MC Tanmay Saxena, known popularly as Tienas or Bobby Boucher, is a breath of fresh air in the city's hip-hop community - bringing to the forefront a Nujabes-inspired sonic aesthetic that hasn't been seen before in a region dominated by 'gully rap'. His debut album 'O' is a 13-track journey with Tienas' thoughts as a musician and composer, sifting through rap with influnces rooted in RnB and rock music.

FTS is a crew from Mumbai who delve in the tracts of hip hop, space, pop and element. Their high energy live performances are to look out for.

Dogz is a hip hop crew from Dharavi, Mumbai.