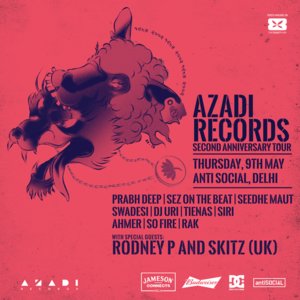 TopInfluencers
ALL ONLINE TICKETS HAVE SOLD OUT - TICKETS WILL BE AVAILABLE AT THE DOOR.

In addition, we're super excited to be hosting Rodney P and Skitz - the pioneering MC and producer duo from the United Kingdom who played a pivotal role in the development of the British hip-hop community.
Line Up
Prabh Deep, Sez On The Beat, Seethe Maut, Swadesi, DJ Uri, Tienas, SIRI, Ahmer, So Fire & RAK

Joining forces they championed the UK bass heavy rap scene, produced the first ever track played on BBC1Xtra and through their own flagship rap show Original Fever spread the message worldwide. Both with deep discographies they have performed from Africa to Australia and everywhere in-between. Supporting the likes of Jay-Z and Kanye West, performing on huge stages and renowned for smashing parties, clubs and festivals with their reggae tinged bass driven sets.

Applicable to patrons above the age of 25. This cannot be clubbed with any existing offer at the outlet. Must carry a valid, govt. approved photo ID. No refunds on purchased ticket are possible, even in case of any rescheduling.

Security procedures, including frisking remain the right of the management.

No dangerous or potentially hazardous objects including but not limited to weapons, knives, guns, fireworks, helmets, lazer devices, bottles, musical instruments will be allowed in the venue and may be ejected with or without the owner from the venue. - same line to be used for illegal substances**

People in an inebriated state may not be allowed entry.

Venue rules apply. Rights to admission reserved by the venue.