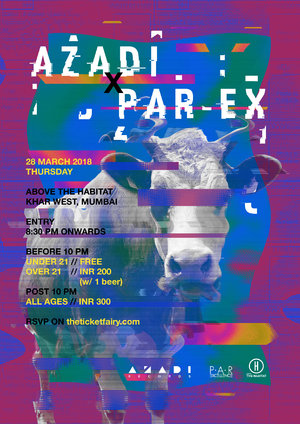 Azadi Records and Par-Excellence are throwing a one-off party at The Habitat (Khar West) on 28th March 2019. Fresh off the cross-continental collaboration between AZR’s Seedhe Maut and Par-Excellence’s Foreign Beggars, the two record labels are getting together to showcase the best artists on their rosters for one-night only.

The night will feature performances by Delhi-based hip-hop artists Seedhe Maut and Sez On The Beat, alongside hometown heroes Swadesi, Tienas & RAK, Azadi's label turntable supremo DJ URI, Bengaluru’s SIRI, a Mumbai debut for Azadi’s latest signing - AHMER from Srinagar, and of course Hip-Hop vets Foreign Beggars for their last show in India before they head back to the UK.

Venue: Above The Habitat, Khar West