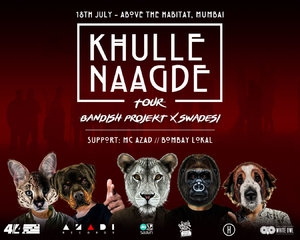 // BOMBAY LOKAL //
"Bombay Lokal" is the very first Hip-Hop collective from "Vasai-Nalasopara-Virar"(northern suburbs of Mumbai). It is a movement initiated by skilled/passionate hip-hop artists to spread the culture and to raise socio-political awareness amongst the youth.