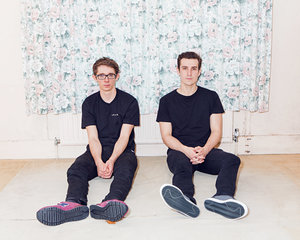 Fred V & Grafix bring a breath of fresh air with their long-awaited second album ‘Oxygen’. The 15-track venture strips away any uniformity, opening up into dreamy, synthesized waves of drum & bass, elements of elegant electro-pop, down-tempo beats, unsuspecting instrumentation and everything in between.

Their progression is clear from the off, the gorgeous ‘Ignite’ details infectious guitar and heartfelt harmonies from Fred V himself and their newest top-line finding, Amy J Pryce. She also appears on vocal led tracks ‘Altitude’ and ‘Electrify’ that push the pair even further into songwriter territory. They’ve spent months working with close friend Tudor Davies - whose vocal leads on romantic slow-mover ‘One Of A Kind’ - to create expressive, honest lyrics and enticing melodies throughout the LP.

Fred V & Grafix’s soundtrack style stands up tall in ‘Nearly There’ and ‘Our Story’ adding a surprise collaboration with Bloc Party front-man Kele to the mix. Both tracks encapsulate the epic, ‘hands in the air’ euphoria that Fred V & Grafix deliver to devoted crowds worldwide. Their drum & bass dancefloor roots remain strong with tracks ‘Stay Here’ and ‘Together We’re Lost’ picking up the pace.

In the debut album 'Recognise' we got a taste for their skills as live musicians. In take two we get even more from Grafix guitars, to drums, keys and Fred V’s own vocals, every element is faultlessly infused with title track ‘Oxygen’ as the perfect example.

Also included are previously released tracks ‘Ultraviolet’, ‘Comb Funk’ and future summer anthem ‘Like The Sun’. With this fantastic follow-up the duo have truly come into their own, an unrivalled pair balancing between drum & bass foundations and future electronic sounds. Fill your lungs and surround your ears with Fred V & Grafix’s breathtaking long-player, ‘Oxygen’.

Fred V & Grafix will be kicking off a busy summer season joining the highly prestigious Essential Mix series with Pete Tong on BBC Radio 1 following previous support for Radio 1 playlist hit ‘Forest Fires’ as well as Annie Mac favourites ‘Major Happy’ and ‘Constellations’. Their busy schedule includes a return to Glastonbury Festival, sets on Reading and Leeds BBC Radio 1 Dance Stage as well as high profile slots at Let It Roll, NASS Festival and the premiere Hospitality In The Park.