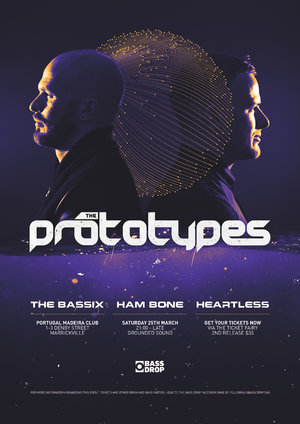 "We're pretty excited to have these guys come back! We're gearing up to bring you some quality sound and wicked vibez!"

Brighton-based duo The Prototypes are one of the most hotly-tipped in bass music and show no signs of slowing down with the recent launch of their own imprint, Get Hype Records. Hot on the heels of the success of their City Of Gold album last year, 2016 brings No 1 Beatport chart topper 'Rocket Guns Blazing', a high budget music video for 'Transmission' in conjuction with the Desperados Bass Drop studios and remixes for 'Netsky' and 'Jauz'.
Renowned for their outstanding releases on Friction's Shogun Audio and Futurebound's Viper Recordings, the duo's mew record label Get Hype Records perfectly illustrates their polished yet energetic, electro-fused sound.
The Prototypes are a regular staple on BBC Radio One and One Xtra with their tracks continuously showing up in the play list of Friction, Huw Stephens, and MistaJam. The summer of 2016 saw them play at the biggest festivals across Europe and US such as Tomorrowland, EDC Las Vegas, and Let It Roll.
With four nominations at the 2016 Drum and Bass Arena Awards it,s not hard to see why the future has never been brighter for one of the most exciting production outfits in recent years.
www.theprototypes.co
facebook.com/theprototypes
TopInfluencers