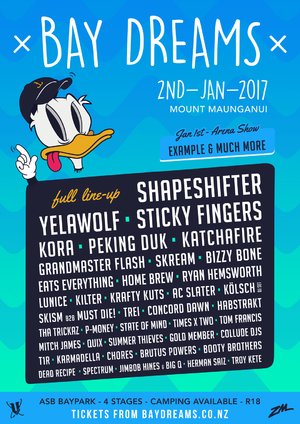 Bay Dreams returns on January 2nd with a line-up that can't be found anywhere else..

Our exclusive NZ festival artists are marked with *

If you thought the Bay Dreams Festival line-up was already next level, brace yourself – this third and final announcement knocks it out of the park.

Presented by Audiology and PATO Entertainment, New Year’s newest festival will kick off at ASB Bay Park Stadium in Tauranga with a warm-up party on January 1, with British dance and hip-hop maestro Example just announced as the night’s headliner.

The main party gets underway on January 2, with US hip-hop star Yelawolf just confirmed. Undoubtedly one of the festival’s must-sees, the Alabama MC is known as one of the quickest and “lyrically dexterous” spitters in the game.

Rounding off the third and final installment is one of New Zealand’s leading forces in the drum ‘n’ bass scene, TREI; local Bay of Plenty jack of all trades Brutus Powers; Dead Recipe; Booty Brothers and Troy Kete.

They join the already revealed line-up:

With such an epic line-up, and being situated just minutes away from Mount Maunganui and Papamoa beaches, Bay Dreams is gearing up to be one of the hottest tickets around this New Year, so those planning on being there need to get in quick to avoid disappointment. For those coming from out of town, there is onsite camping for two nights from January 1.

Get your tickets at www.baydreams.co.nz

A "warm up" party of epic proportions featuring..

Wondering how you were going to recover on January 1st? You're better than that. ;)

We wanted to make your travel plans easy this year by adding camping on the 1st January, mainly to offer an affordable & practical accommodation option before the BIG day.

But in true BD style we couldn't add a night of camping without doing a massive party onsite, could we? Absolutely not.

Already hold a festival ticket but want to add on the warm up party?? HERE'S HOW:

For those that don't have a festival pass, you'll see it available as an add-on when you go through the regular purchase process.

Tickets are on sale from: www.baydreams.co.nz