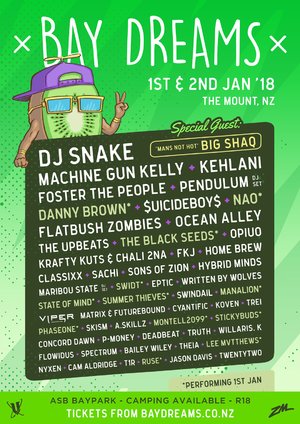 After making history earlier this year, Bay Dreams returns on January 2nd with it's biggest line-up.

Our exclusive NZ festival artists are marked with an asterix* (No, you will not find them anywhere else in the country!)

Promoters will also release an extra 2000 tickets to the festival, which sold out weeks ago.

The tickets go on sale tonight Thursday, November 23 at 7.00pm from https://www.theticketfairy.com/

Bay Dreams will be held at Baypark in Tauranga on January 2, with a warm-up party kicking off all the action on January 1.

Now punters can also add Big Shaq to their list of ‘must-sees’ at the festival. The UK rapper and comedian, whose real name is Michael Dappah, is behind the viral hit ‘Mans Not Hot’. The song’s video features cameos by DJ Khaled, Lil Yachty and Waka Flocka Flame and has clocked up mindblowing 60 million views on YouTube.

Camping is available again, and promoters have gone the extra mile creating a new experience, Dream City, which hosts a massive central entertainment area, a licensed bar, a full marketplace with a diverse range of food and drinks and late night entertainment, as well as games and activities. Glamping upgrades are also available.

This year we have way overcooked it. The 'Warm Up party' has become an optional "Pre Party" event on a larger scale.
Bigger stage design, international acts... all in all something you DO NOT want to miss..

Tickets for Bay Dreams 2018 are on sale now and running out fast!

You can grab a festival pass for $169-179, and you will find optional add-ons available such as camping, merch, and the 'pre-party' event.