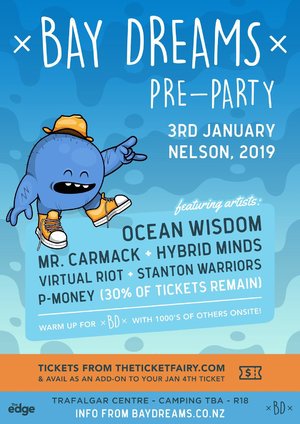 Bay Dreams 2019 at Nelson is upping the ante, adding yet more big acts to the festival’s Pre-Party on January 3 at Trafalgar Centre.

TICKETS are available directly from https://bit.ly/2zP5A1x (or if you have tickets to January 4th Bay Dreams, then available as an add-on at your Ticket Fairy account).

Just confirmed for the warm-up line-up are some of the most notable names in music, including UK Rapper Ocean Wisdom; world renowned international DJ's such as Mr Carmack and Stanton Warriors. Electronic maestros Hybrid Minds who sold out their entire previous NZ run are onboard, with P-Money - the national crowd favourite set to join the party. With more acts still to be revealed, it’s gearing up to be the best pre-party yet!

It sets the scene for January 4 and one of the most exciting Kiwi festival line-ups in recent times, with Cardi B, Tash Sultana, Sticky Fingers, Peking Duk, $uicide Boy$ and Pnau just a handful of the big hitters who will perform across the day. Other must-sees include Macky Gee, Katchafire, Home Brew and an array of exciting acts on the Hospital Records stage.

Although tickets to the main festival on January 4 have long been sold out, there are still some available for the January 3 warm-up. Tickets available directly from www.theticketfairy.com (or if you have tickets to January 4 Bay Dreams, then available as an add-on at your Ticket Fairy account).

With the introduction of a Bay Dreams sister festival in the South Island, in Nelson, on January 4 - Nelson has already sold out its main event and the Pre-Party months ahead of time. Promoters are working hard to extend capacities, and advise those that missed out to stay tuned.

For more information on the South Island line-up and tickets for the pre-party, click here. Punters can also expect an exciting announcement with more names added to the warm-up in the coming weeks.

With a focus on A-Class international and local talent, paired with impeccable production standards, the two sold out Bay Dreams festivals will be the ultimate start to 2019.

Be part of the magic and snap up your pre-party tickets before it’s too late!