Bay Dreams: The Winter Warm Up 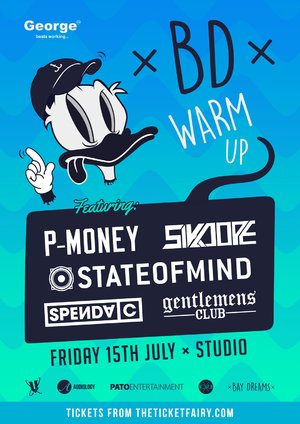 Bay Dreams: THE WINTER WARM UP

Here’s some good news to brighten up these grey wintry days. BAY DREAMS is returning this January and in anticipation of what’s guaranteed to be one of the hottest festivals of the summer, Audiology and Pato Entertainment are hosting BAY DREAMS: THE WINTER WARM-UP.

The not-so-mini festival is being held on Friday, July 15 at the Studio in Auckland and features five electronic bass maestros, who hail from all four corners of the globe.

Waving the flag for locally-made party tunes is P-Money. The Papakura-born producer and DJ is undoubtedly one of New Zealand’s best known and highly respected musical talents. He’s also widely tipped as an ‘artist to watch’ on the international stage. Also joining him in the Kiwi corner is State of Mind. With a string of top-notch releases and collaborations to their name, the drum 'n' bass duo is a force to be reckoned with.

From across the ditch is the OG of the Australian bass music scene, Spenda C. He’s known as one of the hardest working DJs around and aside from holding down a 10 year residency at Sydney’s infamous club Chinese Laundry, he’s performed at some of the biggest music festivals on the planet, including Field Day, Future Music and Breakfest.

The three southern hemisphere acts will be joined by the internationally renowned Polish DJ and producer Sikdope, whose eclectic mix of house and trap has earned him a reputation as one of the most versatile acts in the electronic dance world. Completing the all-star line-up is the British dubstep collective Gentlemen’s Club, featuring Soloman, Coffi and 50 Carrot, who share a common “love of filthy bass”.