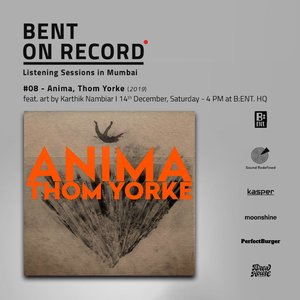 2019 has been a whirlwind year for #BENT! We debuted operations with our live gig series - #GETBENT - in January and had the pleasure of touring with some of the best artists in the country. Following that, our first #BENTonRecord session went live in July and here we are, at our 8th session, the last of the year and we’re super-duper pleased to be celebrating the end of a glittering 2019 with our musical family.

We’re changing it up with a Saturday hang this time and kicking back with one of #BENT crew’s top releases of the year - presenting ANIMA by the king of limbs, Thom Yorke! Released as a download and streaming services in June, the album was accompanied by a 15-minute film by Academy Award-nominated film director Paul Thomas Anderson released on Netflix. The album dropped on vinyl and CD in July, and we steadily rushed to get our hands on it!

The 9 songs on Anima follows a general theme of anxiety and dystopia and the title is a reference to psychoanalyst Carl Jung's concepts of the anima and animus, came from Yorke's "obsession" with dreams. The album, a cool journey through ambient tunes composed and recorded by Thom and produced by long-time collaborator, Nigel Godrich, has been nominated for Best Alternative Music Album and Best Boxed Or Special Limited Edition Package at the upcoming 2020 Grammys and the film’s got one nomination for Best Music Film.

pssssst…The vinyl edition includes a bonus track so we’re excited to be listening to that for the first time with our #BOR fam.

That’s not all… We’re excited to have art by the oh-so-talented Karthik Nambiar on display and for sale at this session at the flea market along with LOTS of goodies (read: BURGERS by Perfect Burgers, MEADS by Moonshine Meadery, Ice Tea by Brewhouse Ice Tea and home audio systems and players by Sound Redefined and KEI HiFi!)

We look forward to ending the year on a super chill note with the creative genius of what we consider one of our generations best and all of y'all who make our community certainly one of the best :) Since space is limited, we will be restricting attendance but be assured that we will try to accommodate as many friends as we possibly can. Make sure you register via the link to block your spot!