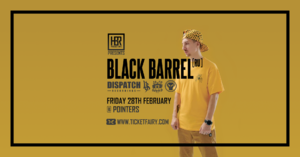 Bringing you the freshest and most talented new faces of the DNB hemisphere, the next installment of HBR presents brings you this legendary Russian producer to our shores!

BIO- The multi genre background of drum & bass artist Black Barrel (Evgenii) has helped him encompass a full spectrum of influences throughout his slick sonic cuts. Whether it was drum & bass, techno, hip-hop or indie rock, he spent years pouring over the many musical avenues which dance music offered, taking inspiration from its every corner. Although the first time Black Barrel was introduced to the versatile 174bpm world was through the ‘Pirate Station’ program on Russian channel ‘Radio Record’. Evgenii would sit patiently during airtime at 1:00am, waiting with his tape recorder and covering the broadcast, despite needing to be up early for school the next day.
It wasn’t until 2012 that Evgenii would hit his first drum & bass night. Here he witnessed genre pioneers Calyx & Teebee, who shook the clubs significant sound system which would have a lasting impact on Evgenii. They were the first DJs he ever witnessed and to this day it remains one of his favourite DJ sets.

The pivotal Russian podcast ‘neuropunk’, led by one of the scene’s biggest names DJ Bes (also a member of the Gydra project) also had a direct impact on Evgenii’s movements into drum & bass. He began actively trying to gain coverage on the podcast, aiming for recognition from both his peers and the wider circuit of DJs featured across its taste maker track listing. As well as the podcast, it was the ‘World of Drum & Bass’ party in 2014 which would eventually solidify his path. Here he met Alexander Nami; a sound engineer working across a variety of clubs, he had access to pioneer decks, where Evgenii was introduced to the equipment and taught the basics of DJing. Since this point, both artists worked hand in hand to build on their skills as both music producers and DJs.

From here his scope widened; after having very little knowledge of drum & bass, his attention soon turned on the likes of Optiv & BTK, Mindscape and Maztek, who lead him into the grittier realms of bass music. Their technicality and the monotony of their grooves are what captured Evgenii and this is something he’d later endeavour to channel within his own productions. However, as time passed he became oversaturated by the neurofunk signature and he searched for a more calm and minimalistic mood. His growing experience with the deeper vibes began to serve as a basis for his discovery of imprints like Dispatch Recordings. At the end of 2016, he became encapsulated by the work of producers such as DLR, Alix Perez, Zero T and Break, who each made their own impact throughout his expanding back catalogue.

Beginning his musical career listening to the likes of Groove Armada, Madonna, Alla Pugacheva, Moby and Portishead, it’s easy to see just how far ranging Evgenii’s tastes stretch. However more recently his own music has been on rotation at home, having just received the first test press of his 3 rd EP ‘Labyrinth’ on Dispatch Recordings, demonstrating the ruminations of artists like DLR and Break. As well as an LP for Dispatch waiting in the pipeline, pushing his minimalist roots but also a weighty, junglist influence, he’s defined his sound through previous records such as ‘Void’, ‘Osteopath’ and ‘Ghostdive’. More recently, his forthcoming release ‘Still Fucking Warm’ on DLR’s Sofa Sound has continued to set a standard, one which has been gaining momentum on each one of his outputs. And having just begun his journey, Black Barrel epitomises the new breed of producer, bringing with him the contemporary styles and stylistic roots which made the genre originally so recognizable.