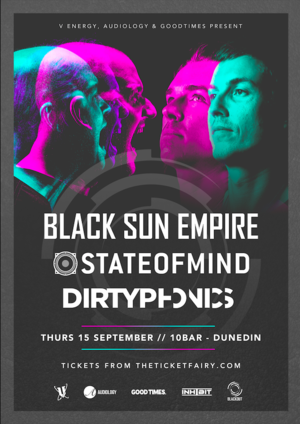 Shattering expectations with a blend of electronic, heavy metal, drum & bass, trap, dubstep and electro, it’s a sound the guys come by honestly, having cut their teeth in the Parisian metal scene and the electro French Touch 1.0. The evolution of Dirtyphonics has unleashed a forward-thinking bass music powerhouse that has made its name on defying labels and limitations.

Black Sun Empire represent the finest in dark and tech fueled dance-floor drum & bass. Since bursting onto the scene back in 2000, they’ve continued to develop their own unique style and sound, releasing numerous singles as well as five full-length LPs and establishing themselves as leaders in the field.

With their impressive DJ skills and inspirational productions, Black Sun Empire have reached far beyond their native Holland. They’ve toured the world over, with highlights including Glastonbury and numerous other festival appearances, and continue to build on their growing reputation as some of the most exciting and consistent performers around.