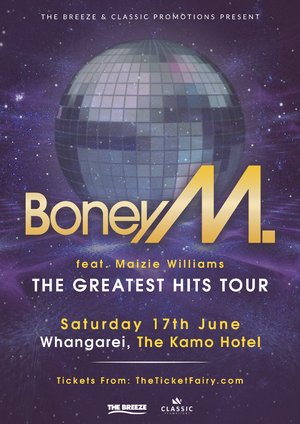 Saturday 17th June - Whangarei @ The Kamo Hotel - THIS EVENT IS STANDING ROOM ONLY.

The Euro-Disco group Boney M was a European phenomenon during the '70s. After German record producer Frank Farian recorded the single 'Baby Do You Wanna Bump?' in 1974 he created Boney M to support the song, bringing in four West Indian vocalists who had been working as session singers in Germany -- Marcia Barrett, Liz Mitchell, Maizie Williams and Bobby Farrell.

Boney M's first appearance in Germany was a performance of the song "Daddy Cool" in the then important and famous TV-Show "Musikladen" in 1976. After that TV-Show appearance the sales of the single were about 100,000 singles each week. From then on the album (Take The Heat Off Me) took off. In July 1976, "Daddy Cool" became the first Number 1 for Boney M in Germany and a Top-10-Hit in December 1976 in the UK. That same year in Germany, the follow-up to Daddy Cool was a remake of Bobby Hebb's "Sunny", which hit Number One in December 1976, and Number One in the UK in March 1977.

In May 1977, "Ma Baker" again scored top ten in the U.K charts, and "Belfast" hit the Top Ten in October. In 1978, Boney M was at the height of its popularity with "Rivers of Babylon"/"Brown Girl in the Ring", which became the second-biggest selling single in U.K. chart history. "Rivers of Babylon" also was Boney M's only U.S. Top 40 hit. Boney M's album "Nightflight To Venus" also topped the U.K. charts. In September 1978, "Rasputin" became another U.K. Top Ten hit, followed by the seasonal chart-topper "Mary's Boy Child"/"Oh My Lord", which became the fifth-biggest selling single in U.K. history. In March 1979, "Painter Man" hit the U.K. Top Ten, followed in April by "Hooray! Hooray! It's a Holi-Holiday". In September, the album "Oceans Of Fantasy" hit number one.

Making a balance-sheet after 10 years, they have counted 18 Platinum and 15 Gold-LPs, more than 200 Gold and Platinum Singles and about 150 Million sold units all over the world.