Bruce Dickinson "What Does This Button Do?" 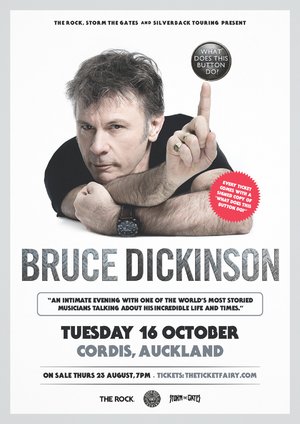 The lead singer of Iron Maiden, Bruce Dickinson, will perform a special one-man speaking tour of Australasia this October, with an Auckland show at The Cordis Hotel (formerly the Langham) on October 16.

Delivering compelling excerpts from the book, slides and a Q&A, fans will get the chance to ask questions of the heavy metal icon in an up-close-and-personal setting.

Ticket purchasers will also receive a signed copy of the New York Times best-selling autobiography, which Rolling Stone describes as both insightful and entertaining.

“Throughout, he interweaves stories of Iron Maiden’s glory and playing solo shows in war-torn Sarajevo with tales of recovering from falling off stages. He offers glimpses into his offstage life, whether it’s fencing, piloting 757s, hosting a radio show or writing novels and screenplays - all with the requisite tales of bumps, scrapes, hurt feelings and terrifying engine malfunctions. And in the book’s longest chapter, he opens up about the battle with cancer that nearly sidelines his singing career.”

Born in the UK, Dickinson launched his career singing in pub bands in the 1970s. He joined Iron Maiden in 1981 with his first record with the band being 1982’s famed THE NUMBER OF THE BEAST. He quit the group in 1993 to pursue his solo career, rejoining again in 1999.

Dickinson is well-known for his passion for flying, notably captaining Iron Maiden’s converted charter plane Ed Force One during world tours. In 2015, he underwent surgery for tongue cancer and was later given the all clear.

Do not miss your chance to hear one of heavy metal’s greats opening up about his life in, and out, of music.

BRUCE DICKINSON – WHAT DOES THIS BUTTON DO? - ONE MAN SHOW

Tickets on sale Thursday August 23 at 7.00pm from www.theticketfairy.com