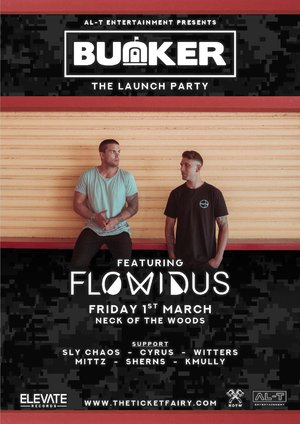 After many successful years AL-T Entertainment have decided to start a new night/brand with the intention of showcasing the dramatic rise of DNB in the Auckland community. Our aim is to not only use high end Internationally known acts but also to highlight the strength and depth of the local support scene. We want to create amazing vibes from start to finish around some of the best clubs and venues within the region.

We present our first artist

Born just prior to the early 90’s rise of drum & bass, producers Raphael and Garo have rooted their sound in the form, both as solo artists, and now collaboratively. Their combined passion for good vibes, and being able to share that with their fans was what defined their stage name ​FLOWIDUS​, with both producers being quoted as saying “when people see us or hear our music, we want them to feel apart of it."

Bursting onto the scene in 2016, with their debut EP on Program Records. 'From The Storm' exhibited their smooth production, variety and evolving style. Since then the budding partnership have unleashed a slew of releases on labels such as RAM, Onelove, Liquicity & Good Karma Music.

Alongside their standalone productions, reworks for artists such as DC Breaks broke into the Beatport top 10 while also gaining extensive support from the likes of Friction, Pendulum and Andy C to name a few.
More recently, Flowidus joined forces with the legendary Tiki Taane to create ‘Horizons’, a song that showcases their taste for nostalgic melodies, and further highlights they're ability across all walks of Drum & Bass