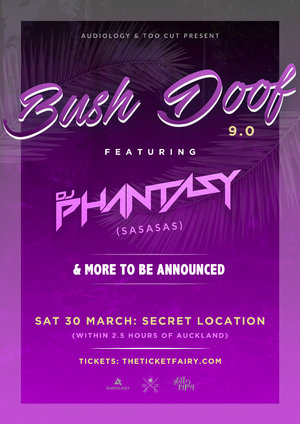 Our Doof's will be spoken about for years to come.

As per usual we can't tell you much more, every Doof we try outdo the last. Ticket holders will be notified of the exact info and location whilst the rest of the world can watch the after movie and weep.

A key member of the extremely successful SaSaSaS group and ‘the Harry
Shotta Show’, DJ Phantasy has over twenty years experience as a dj,
producer, event promoter and owner and director of the successful Easy
Records and more recently the independent Chart topping label, Showtime
Music.
Phantasy has produced some of the biggest underground drum & bass
singles in the scene’s history and his recent exploits with studio partner
Macky Gee have seen the duo produce some of the biggest anthems in Drum
and Bass right now. Their music is getting massive support on mainstream
radio and from DJ’s across the World.
He also produced the track ‘Animal’ with Harry Shotta and Dextone, which
beat Eminem’s World Record for the ‘most words in a song’ and this record is
currently sitting in the Guinness World of Records book 2017 as an official
World Record.
He is currently working on an online TV project alongside one of his business
partner’s Harry Shotta in conjunction with YouTube which is currently being
filmed and produced at the brand new YouTube building in Kings Cross,
London. The new channel titled, 24seventv, will not only have music as part of
its content but it will host anything from current affairs, technology,
challenges and anything that is of general interest.
His Twitter Biography simply states “Involved with more things that you may
realise” and as vague a statement as that may seem, there's a much larger
truth in it. Always there to back and support people with their projects,
Phantasy is very much someone who tries to help people bring their ideas to
life and as a stanch supporter of the industry, Phantasy's legacy has been the
firm foundation upon which he has built a drum and bass empire and one that
continues to grow in strength by the day.
https://www.facebook.com/djphantasy
https://www.twitter.com/djphantasy
https://www.instagram.com/djphantasy