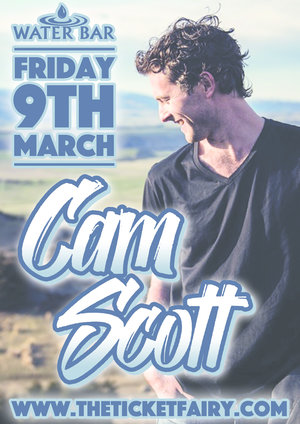 Returning by popular demand Water Bar is proud to present:

Following on from his last smash hit performance with us Cam Scott will be taking the bar by storm, expect to sing along at the top of your voice and have aching feet the next day. This is not a performance to miss!

GET YOUR TICKETS NICE AND EARLY TO AVOID MISSING OUT!!!

New Zealand’s contemporary country-rock scene is being driven forward by one of country music’s hottest male artists, Cam Scott, recently awarded CMANZ Male Artist of the Year less than 12 months since his launch as a recording artist.

Since debuting his recording career in late 2014 with summer country-pop track, SOMETHIN BOUT A GIRL, Cam’s performed at CMC Rocks QLD (alongside Lady Antebellum, Big & Rich & Lee Brice), at Tamworth Country Music Festival (alongside Morgan Evans & Kaylee Bell), as well as growing with the growth for the genre in the South Island headlining & performing at key events such as the iconic Middlemarch Singles Ball and Lincoln Barn Party & Lincoln Garden Party.

Cam has been announced on the CMC Rocks QLD line-up in 2016 (alongside Florida Georgia Line, Jason Aldean & Kelsea Ballerini), as well as more exciting big stages in the pipeline for late 2015/2016.

His debut onto the international country music scene follows his long list of accomplishments in New Zealand and Australia signalling his bright future as a talented artist.

He has already won the NZ Gold Guitar Senior Male Section, Senior Overall at the NZ Southern Alp Awards and the latest which is the pathway to the country music capital of the world, the Horizon Award at the 2013 NCMA which saw him have the opportunity to perform on the Global Artist Stage at the 2014 CMA Fest, the world’s biggest country music event.

He has also been involved in the Australian country music scene attending the Australian College Of Country Music in Tamworth, NSW, in 2011 and then performing at the Tamworth Country Music Festival where he won the 2012 ‘Aristocrat Entertainer of the Year’ and Male Section of the CCMA Awards.

Cam brings his high energy performance to all his live shows with new music off his soon to be released EP in early 2016, along with covers of the best contemporary country/rock from the US.

New Zealand IDOL finalist, Ashley Cooper, singer/songwriter Michael Tipping make up the hottest duo in the Southern Hemisphere! Michael and Ashley began performing as a duo in September of 2008. They started out working clubs and private parties around northern New Zealand, their home. In October, just one month later, they were named the winners of the Rising Star Award at the Variety Artist Club Annual Awards Show. From that moment on, demand for their music has sky-rocketed, and they’ve been working non-stop in New Zealand, Australia and USA. Avid and skilled songwriters, these two also got the nod as New Zealand Country Music Song Writers of the Year. Coopers Run were the very first Kiwi's to appear on the Country Music Association's Global Artist Party in Nashville Tennessee! The event was viewed by over 40 million people, and they were backed by legendary singer/songwriter Pam Tillis's band. During the trip to the United States, Coopers Run met producer Jeff Huskins. Huskins was immediately convinced of the star quality of these young people. Rarely does the entire package walk in your door. They simply have it whatever it is. That very same night, sessions were scheduled using the finest engineers and musicians in Nashville, and the results are phenomenal! Make no mistake Coopers Run will be a major force in the music industry. There’s no limit to their potential, and the record companies that have heard the project are completely knocked out. Upon arriving home from their United States trip, they were booked to open for Glen Campbell’s New Zealand tour. In April 2011 Cooper’s Run was hand selected by management to support Grammy award winning Nashville band Lady Antebellum for their first NZ show and in 2012 they took to the stage with NZ icon John Rowels to support Kenny Rogers in his 2 sell out NZ shows. Coopers Run has appeared on the Johnny High Country Music Revue, the springboard for such superstars LeAnn Rimes, Steve Holy, Lee Ann Womack, Gary Morris, Linda Davis, Box Car Willie, and John Anderson. In 2010 Coopers Run were crowned New Zealand Country Duo/Group of the year at the National Country Music awards. Coopers Run completed a six month contract with Carnival Cruise Lines based in Florida and servicing the Eastern and Western Caribbean, Mexico and Grand Bahamas’. 2013 saw another huge year for Cooper’s Run releasing their studio album “Unfinished” along with re-claiming their title as NCMA Duo-Group of the year. 2014 Cooper's Run left their stamp on Georgia USA having completed their first international tour in June. While in Georgia Cooper's Run recorded their new album Made in Georgia which is also the first CR album to be 100% original music. Made in Georgia has so far produced a #1 hit single “Burn the Moonlight” and the album itself has taken the top spot on the ITunes album charts and debuted at #9 on the Official NZ top 20 Albums charts.