The Beauchamp Hotel , Darlinghurst [All Ages] 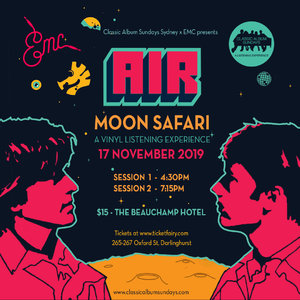 Classic Album Sundays Sydney is so pleased to return to EMC to present the album that has been our most requested: Air's timeless 1998 debut album, Moon Safari. If you attended Music for Museum, our special ambient session at the Australian Museum last year, you know how much Air's music means to us; celebrating Moon Safari in full, on vinyl and in audiophile hi-fi will be a great sequel to that memorable night. With its shimmering synths, sexy grooves, trippy cosmic themes and Frenchy & chic vibe, this milestone album is a perfect one for our format. We think it will sound phenomenal with a roomful of fans in the Velvet Lounge at the Beauchamp Hotel!

CAS Sydney is proud to be a part of EMC Festival, Electronic Music Conference’s program of showcases, parties, club nights, pop-ups, film screenings and more. For more information on EMC head to their website: www.electronicmusicconference.com

We will be hosting TWO SEPARATE SESSIONS, to accomodate more attendees. The sessions will take place back-to-back on Sunday November 17. The 1st SESSION opens at 4:30 PM, and the 2ND SESSION opens at 7:15 PM. Before you purchase, make sure to click on the CORRECT TIME for the session you wish to attend.

- 4:30 pm – doors (playlist & drinks)
- 5:30 pm – presentation begins
- 6 pm – playback of album begins
- 6:45 pm – playback ends
- 7 pm – end & clear room (unfortunately attendees will have to leave earlier than usual for this session so that we can begin the next session, but you are more than welcome to stay and hang out in the bar upstairs)

What is Classic Album Sundays?

Classic Album Sundays is the world's most popular record club. CAS allows the listener to fully immerse themselves in the music by presenting the musical context, the story behind the album and an uninterrupted replay of the album on vinyl on an audiophile hi-fi sound system (with phones switched off and no conversation). People learn about the history of the album and then hear things in the music that they have never heard before. The events are mainly attended by non-audiophiles who are sometimes moved to tears when they hear the details of their favourite recordings.

CAS currently holds regular classic-album listening sessions in London, Adelaide, New York, Glasgow, Edinburgh, Tokyo, Amsterdam, Oslo and many more cities. As it has touched upon a cultural nerve with its mission of challenging the way we listen to music in the 21st century, CAS has received amazing coverage in BBC Breakfast TV, The Guardian, Elle Magazine, NME, The New York Times, The Wall Street Journal and more.

Watch the recent feature about us on the ABC Arts's The Mix: https://www.facebook.com/ABCARTS/videos/488997954973298/UzpfSTUyOTA1MzEwNjoxMDE1NjQwMzUzMzU3ODEwNw/

Check out the wonderful article about us by Walkley Award-winner Kate Hennessy in Guardian Australia: https://www.theguardian.com/music/2017/may/09/in-full-on-vinyl-no-chatter-have-we-lost-the-art-of-listening-to-music-

Classic Album Sundays was founded by Colleen “Cosmo” Murphy. Murphy is a radio host (having hosted shows since 1982 and having produced widely syndicated radio shows in the USA); an international audiophile DJ (protegé of David Mancuso and Francois Kevorkian and Director of London's Lucky Cloud Sound System); music producer and remixer (remixes for The Rapture on DFA and producing Wild Rumpus with guitarist Gary Lucas of Captain Beefheart and Jeff Buckley fame); independent label owner and a music journalist. In her younger years, Murphy worked for a number of well-known record shops, where she amassed far too many records.

For much more about Classic Album Sundays, visit the homepage: http://classicalbumsundays.com/