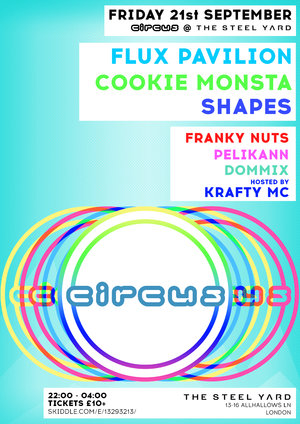 Over the last 12 months Flux Pavilion has continued to release hit after hit to his catalogue. Following on from his Tesla LP and the huge 'Feel Your Love' with NGHTMRE, Flux hasn't stopped. 'Pull The Trigger', 'Stain' and most recently 'Call To Arms' have all become massive records in the bass music world. The journey started with 'I Can't Stop' and 'Bass Cannon', but the music coming off the Flux Pavilion desk continues to get bigger ad better every year.

In amongst slaying the world with his touring, Cookie Monsta isn't shying away from the studio either. Dropping heavy hitters like his re-rub of the whopping 'Ruff' plus underground smasher 'Xterminate' in the last few months alone. With headline appearances in the US at the likes of Lost Lands it's a pleasure to have Cookie back in the UK with the gang.

Bassline House act Shapes are at the forefront of the new sound. Their hit singe with Doctor P 'Cold Individual' has been making a massive impact on both sides of the Atlantic. Franky Nuts is no stranger to the Circus audience, without doubt one of the family. Appearing before the London Circus crowd for the second time, expect many a future hit to be road tested.

Saucy Records have become a major player in the UK over the last year or so, it's an honour to have their star player Pelikann join the latest Circus line up. Dommix makes his London debut after a slew of big releases on DJ Zinc's Bingo Bass imprint.

Expect another unforgettable instalment of the Circus story.