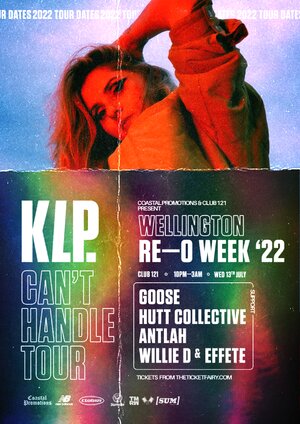 TopInfluencers
Coastal Promotions & Club 121 Present: Re-O Week ft. KLP (AUS) - Wellington
With Wellington missing out on O Week this year, we knew we had to take things up a notch for Re-O Week. We have secured not one, but two international artist shows for our biggest Re-O Schedule yet.
We have teamed up with our friends at Club 121 to present a house music night featuring superstar Australian artist KLP for the Wellington leg of her “Can’t Handle Tour”.
KLP is widely regarded as one of the biggest house music acts in this corner of the world, with her collaborative track with Stace Cadet, “Energy”, becoming an anthem across the global dance music scene.
She is supported by an all-star student DJ lineup consisting of Goose, Hutt Collective, Antlah and Willie D & Effete. Our aim is to put these local developing house artists on full display.
Come join us for a Re-O Week live music experience where it is all about the four to the floor, hosted as Wellingtons leading house and techno venue, Club 121.
__________________________________
Individual Tickets and Re-O Week Combo Passes on sale Thursday 16th June at 7:00 pm
__________________________________
Lineup
KLP (AUS)
Goose
Hutt Collective
Antlah
Willie D & Effete
Wednesday 13th July (Re-O Week)
10:00 pm - 3:00 am
Club 121
21 Cambridge Terrace, Wellington
R18
This is an open, all-inclusive party for people from all walks of life. We are fully committed to creating a safe space for everyone and anyone who wants to have a good time and enjoy some live music. Harassment of any kind will not be tolerated.
Thanks to our sponsors at Jagermeister & New Balance
KLP Bio:
Across a superb career, Sydney’s dance music empress KLP (Kristy Lee Peters) has certainly claimed the title of bona fide in demand artist, as a 4 x ARIA nominated singer, songwriter, DJ and producer.
The last decade has seen KLP own the dance music scene in Australia and abroad with fierce ambition, gracing stages at Splendour In The Grass, Field Day and more, while securing cowrites on tracks with Skrillex, What So Not, Peking Duk and Benson to name a few.
A true creative and sonically forward thinker, the notable APRA ambassador has driven charts, playlists, dance floors and festival fantasies with high -energy house and tech house sounds, fusedwith the most memorable vocals, while also known for having primed audiences on triple j’s House Party for a solid five years till 2019.
Riding the heels of a profound dance music journey, KLP’s hit single ‘Energy’ with fellow Australian producer Stace Cadet Came in at #21 on the triple j Hottest 100 and was nominated for ARIA’s Best Dance Release, making it one of 2020’s most successful dance hits, accompanied by platinum selling status. With distinguished accolades, she went on to release ‘People Happy’ with Stace Cadet once again, celebrating echoed success on triple j, globally renowned BBC Radio 1 and New Zealand’s George FM.
A true powerhouse, KLP recently dropped her single ‘Busy Dancing’ on Medium Rare Recordings cementing itself as the ultimate club force, ahead of the next track ‘Can’t Handle’. The first solo releases are part of an incoming 4 -track EP and has gained significant support across Spotify, Apple Music and more.
Outside of platinum selling music and high -energy shows, KLP lends her expertise and passion for mentoring to emerging singers, songwriters and producers as part of the APRA Songmakers program, while executing a string of successful writing camps and charity netball tournaments across the music industry.
In absolute command, KLP holds down a plethora of roles across the electronic spectrum, gaining huge respect from industry peers and fans alike. From DJ, singer, songwriter and producer to such a well -respected advisor, KLP has truly solidified herself as an Australian dance music icon
TopInfluencers