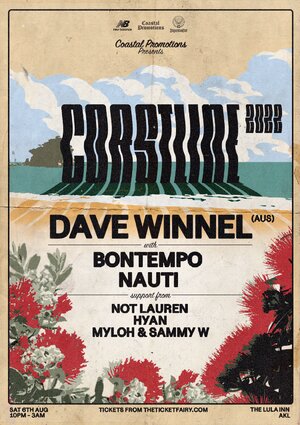 Coastlines goal is to create a new type of live event experience, where a premium venue and diverse multi-genre international and local lineup is paired with a central theme and unique sponsor activations.

Centered around an all-inclusive and diverse ethos, our aim is to create an environment that welcomes people from all walks of life. With a handpicked lineup featuring house, hip-hop, and liquid drum and bass.

This event is headlined by renowned Australian house music artist Dave Winnel, with his first ever New Zealand performance. Dave Winnel’s name is synonymous with dane music, having wracked up 10s of millions of streams across his catalogue and playing some of the biggest festivals/events in Europe, Asia, Australia and beyond

Our co-headliners are rising Wahine house music star Bontempo & one of the country’s best hip-hop artists, Nauti. They are both phenomenal local talents in their own right.

On support duties, we have multi-faceted talent Hyan, house DJ duo Not Lauren and our own Coastal Collective members Myloh & Sammy W.

Thanks to our sponsors at Jagermeister and New Balance!!

Sydney´s own, Dave Winnel, is conquering the world with his unique take on the house genre. This DJ/Producer is going from strength to strength with his latest single’s, ‘CEO, ‘Jungle Juice’ & ´Boomerang´ added to full day time rotation on Australia´s leading radio station, Triple J. His previous release ‘Smoke Machine’ was a beatport #1 and was also added on spot rotation on triplej. Ending 2021, and kicking off 2022 with a Bang Dave was enlisted to remix Darude’s ‘Sandstorm’ for the ALDI Christmas TV campaign and also performed TOTO’s Africa for triple j’s ‘Like A Version’.

He´s collaborated with legendary Armin Van Buuren, on ´The Race´, and produced official remixes for Twenty One Pilots, David Guetta, Bastille, Anne-Marie, Clean Bandit, Hardwell, Axwell /\ Ingrosso, Adam Lambert, & Galantis, proving himself to be one of the most prolific electronic acts.

Dave has toured around the globe, playing shows in Japan, France, Bali, Philippines, Hong Kong, Macau, Sweden, Croatia and the Netherlands, along with big name Tomorrowland & Stereosonic. This vegemite loving producer is known for his infectious & fun personality and this shines through his music, blending future/tech house with organic quirky instruments.