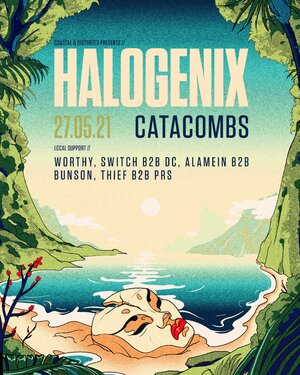 We have secured one of the most legendary artists in Drum and Bass for our first ever international artist show in Dunedin.

Halogenix has been a staple of the genre for over a decade, with countless notable releases and a unique sound that is unmatched by anyone else in the scene.

Bio:Progressive talent Halogenix has swiftly scaled the ranks in recent years to find himself on the leading-edge of innovative drum and bass music. His background as a classically trained musician combined with an ear for a vast range of sonic influences has manifested in the distinctive productions that you hear today.

The adept North Londoner broke in 2011 with the clinical vigor of ‘Halcyon Daze’; a Hydro collaboration for underground heavyweights Horizons Recordings on Dream Thief 2 EP. The pair continued to play with their formula with the foreboding minimal tech of 12” ‘Trieste / Disillusioned’, before Halogenix appeared on Noisia’s imprint for breakthrough experimentations, Invisible, with ’Askari’ on Invisible EP 4, alongside future partners Sabre and Stray; all of which gaining airplay across the DJ circuit and a fostering a following straight off the back.

The game opened up for Halogenix when the versatile producer teamed back up with Sabre and Stray in 2012 to formulate the indelible Ivy Lab; composing arguably the most celebrated tune of the year, ‘Oblique’; gaining the traction to secure acclaim from both the scene’s biggest tastemakers and scores of new fans. Calibrated by a shared ethos and a proclivity for the outer stretches of the genre and beyond; the unique trio, signed to Kasra’s Critical Music, have gone on to relish huge success with the releases ‘Missing Persons EP’ and most recently ’20 Questions EP’ with their eclectic brand of silky smooth rollers, ultra-clean tech and crunching glitch-hop experimentations.

Aside his formidable collaborative projects, Halogenix’s solo outings have ascended the echelons of drum and bass; lending his futuristic sound palette to scene proponents Dispatch Recordings with the rolling ‘Take The Lead EP’, Critical Music once again with ‘Systems 001’ and in 2015 with the classy ‘All Blue EP’ on Metalheadz.

Halogenix’s aptitude for DJing is also clearly evident, bringing energy and class to each lineup he appears on. Playing at Fabric’s Critical Sound shows and the bass-fusion 20/20 events as one part of Ivy Lab; he also displays his individual finesse featuring on lineups for Metalheadz, Ingredients Records and as a host of the Critical Sound show on London’s Rinse FM.