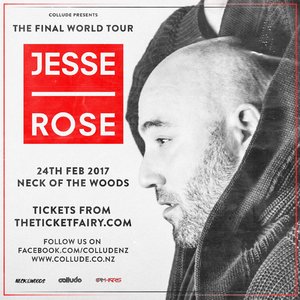 'Thanks for Dropping by - The Final World Tour' In NZ

Support TBA
JESSE ROSE is to Retire as both a producer and DJ in 2017.His final album ‘Alright Mate’ is to be released early February 2017 and will be his final solo production. Jesse’s concluding World Tour information will be released in early 2017, but it can be said that it will be a serious celebration of his involvement in House music over the last twenty years. The tour will feature friends and collaborators from throughout the years and icons from both the House and Techno scene, who will take to the decks alongside Jesse in celebration of what can only be described as an “epic journey.”

Over the past twenty years Jesse has, in his words, “by far exceeded his dreams in this industry,” never expecting to reach the many heights & accolades he has. Now with over a hundred productions and over a hundred remixes to his name, he has decided that 2017 is the perfect time to pass on the baton to the younger generation that he has always continued to support.

In the last twenty years Jesse has exceeded his dreams in the scene playing clubs like Fabric, Robert Johnson to Womb along with hundreds of others (too long list), residencies at the most respected clubs such as Panorama bar to Watergate and headlined festivals playing to thousands upon thousands of people that have the same love of the music he does. Did he think he’d end up producing, “Hell no!: Let alone remixing the likes of Bob Marley, Kevin
Saunderson, Armand Van Helden and hundreds more. Did he imagine he would get to start a group with one of his biggest inspirations Henrik Schwarz? “Of course not.”
Have a mega talent like Switch teach him how to produce? “You have to be kidding.”Have Hot Chip sing an ode? “No bloody way!”

From celebrated albums, BBC Essentials mixes, compilations for Fabric to Get Physical, a place in the BBC Hall of Fame, his labels Play It Down, Made To Play and Front Room, creating nurturing and developing new careers for the likes of Oliver Dollar, Riva Starr and so many more. Jesse has infiltrated every part of dance music, flipped the template of House whilst always maintaining his natural cheeky vibe disposition.