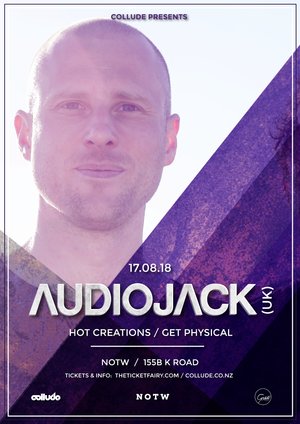 Tickets go on sale 18th of July from www.theticketfairy.com

One from Collude's history books, in 2011 we co-hosted our first international act - Audiojack at the Auckland Museum, kick starting our taste for touring top tier international acts to NZ. After a long string of killer releases and for the first time since 2011, one of the Audiojack members returns to our shores.

Audiojack are the Leeds grown, Ibiza based duo who have built a sterling reputation over the last decade as DJs, producers, remixers and label owners. Their music can be found on labels such as 2020Vision, Hot Creations, Tsuba, Leftroom, Get Physical and Culprit. Their remixes on labels including Moon Harbour, B-Pitch Control and Diynamic, whilst Underworld, Groove Armada and Hot Since 82 are amongst the artists to have enlisted Audiojack as remixers.

The duo have been mainstays on Ralph Lawson’s 2020Vision recordings for over a decade where they released their debut album ‘Radio’, and several bestselling EPs including ‘Get Serious’ and ‘No Equal Sides’. More recently Audiojack signed to Jamie Jones’ infamous Hot Creations label, debuting with the heavily played ‘Vibrate’ EP, which features their good friend and vocalist Kevin Knapp on vocals; one of many collaborations between the transatlantic trio. Running their own dance floor focused label Gruuv for over five years has provided an alternative home for their original music. EPs such as ‘Stay Glued’ and ‘These Days’, which include their rework of Jaydee's classic 'Plastic Dreams' were received to critical acclaim. The label has also garnered a reputation for nurturing the best talent, new and old, and counts Emanuel Satie, David Mayer, Marc Romboy, Dachshund, Hugo, David Pher, A1 Bassline, Hermanez and Black Loops amongst its regular releasing artists.

It was Audiojack’s passion for DJing which drove their desire to produce music and create a label in the first place, and with two decades behind the decks they craft their sets with energy and panache. Over the last ten years they’ve played hundreds of cities in over sixty countries. Some of their favourites include fabric in London, Space in Ibiza, D-Edge in Sao Paulo, Watergate in Berlin, Rex in Paris, Fabrik in Madrid, Basics in Leeds, Harry Klein in Munich, B018 in Beirut, Electric Pickle in Miami, Spice in Sydney and Tanzhaus West in Frankfurt to name a few. Frustrated at the commercialisation and rampant extortion by Ibiza’s summer clubs Audiojack were compelled to add promoter to their repertoire in 2015 with the launch of their Sunday Social free party. Held at the intimate Veto club the ethos is aligned with the true spirit of Ibiza. A small place with good music, unannounced guest DJs, no door charge and reasonably priced drinks.

Remaining true to their beliefs and staying relevant without being contrived is at the core of Audiojack's success. The duo never rest on their laurels, reinventing themselves whenever necessary, though in an organic manner. In today's fastpaced, ever growing world of electronic music it's not always easy to keep a cool head and maintain credibility and integrity. However, Audiojack stand proud as an example of how to do things the right way. Long may they continue.

Thanks to
Thick as Thieves
Collude