Secret location - Outside of Lockout Laws , Sydney [All Ages] 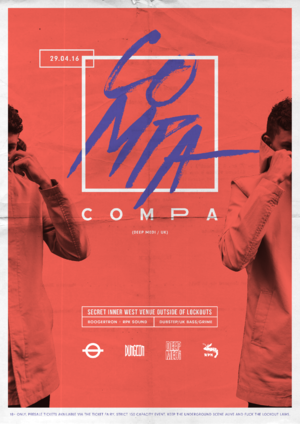 Big Ting Recordings, Dungeon and the Rabbit Prawn Kollective are proud to announce a show like no other, with an international as effervescent as.... Well the effervescence of a cracked tinnie. On his first ever Australian tour, we give you, Compa.

Purveyor of all deep dub style riddims, Compa will bring his Deep Medi influenced fire to our ears through the joint bass bins of the Grounded and RPK Soundystems. For the steppers and the heads, this is not a dubstep show to be missed. Innerwest BYO location, outside of lockouts, well away from Baird. Strictly limited 150 capacity, tickets on sale at the end of the week.

"Following his debut appearance on Get Darker TV in March 2011, Compa released his inaugural 12" single with one of Dubstep's foundation imprints Boka Records (Tracks 'Sentence' and 'Beginning'), and his infamous bootleg of Mavado’s ‘Dem A Talk’ which sold out worldwide within one week of its release, and at the tender age of just 21, he's newly signed to Mala's Deep Medi Musik label, perhaps the most revered seal of approval in underground Dubstep circles.

The Compa sound has received acclaim from across the board with key influences like BBC 6 Music's Gilles Peterson & Nerm showing praise, as well as MistaJam, Toddla T and B-Traits on BBC Radio 1 and 1Xtra, not forgetting J:Kenzo, Jay 5ive, Plastician and N-Type amongst others on the prestigious Rinse Fm. Tracks have even found their way into the record bags of scene pioneers Chase & Status (Ram, Mercury, Renegade Hardware), US Dubstep Ambassador, Joe Nice (Dub War, Reconstrvct) and of course Mala (Deep Medi, DMZ) who has now signed Compa to his seminal Deep Medi Musik label.

...and yet despite his tour schedule and between studio time, you can still hear Compa play live on Sub FM once a month, Monday 6pm-8pm GMT."