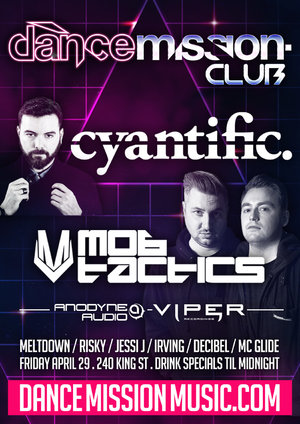 "This round we are going in large with drum and bass legend Cyantific alongside the mighty Mob Tactics. Main room, serious sound and supported by quality local Melbourne talent. Come join us for some next level Dance Mission Club business"

Cyantific AKA Jon Stanley, has been at the forefront of drum and bass for over a decade. Known for devotion to his decks, pinpoint accuracy in the mix and his ability to construct dance floor anthems has seen Cyantific DJ around the globe.

In December 2014, Cyantific signed exclusively with Viper Recordings, and made his debut with 'Bring You Love', followed by his #1 single 'High Water Mark', alongside his remix of Brookes Brothers - 'Anthem' which was selected on BBC 1Xtra's "A" playlist.

His single 'Colour In Shadows' feat Benji was premiered on Radio1xtra with Mistajam and was a 2015 Summer Anthem with the B side dancefloor roller 'No More Heroes' smashing the beatport charts once again.,He released his first track of 2016 ‘Outatime’ which immediately went to the number one spot on Beatport.

Cyantific continues his exciting journey to the top…

Mob Tactics seem to be a name on people’s lips more and more of late. Already renowned for their own inimitable style of techy – yet very funky, dance-floor orientated drum & bass, the duo appear to be going from strength-to-strength with each release. Their tunes are already firm staples in the sets of Andy C, Friction, DJ Hype & Audio, to name but a few, and the demand for them on the DJ circuit is rapidly gaining momentum.

With their remix of Cause4Concern’s early 2000 anthem: ‘Soul’ they went on to feature in the sets of just about every man and his dog! Prolix snatched up ‘Grotbags’ for his Trendkill imprint, and the legend that is Andy C signed up ‘Wolf Trap’ exclusively for the sixth instalment of his hugely successful Nightlife compilations. In 2014, the duo showed no sign of slowing things down. With their ‘Wasted’ EP release on Cause4Concern Recordings, their single ‘Joe Mangle’ for Ram, and with a DJ schedule that shaped up rather nicely, things went fast for Mob Tactics. 2015 was the year of the exclusive signing to Futurebound’s Viper Recordings with their debut single ‘Neon God’. Mob Tactics ended the year with the dancefloor aimed track ‘Rave Weapon’.

They started the new year with a banger. Mob Tactics dropped their second Viper single with the harder, darker and dirtier affair in the form of ‘Get Dirty / Shark Tank’ which went straight to the top 10 on Beatport!