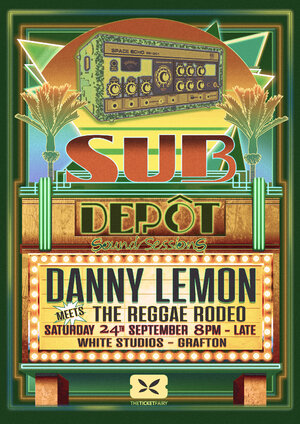 Sub Depôt is proud to have as Special Guest on the night ex -pat Londoner Dj Danny Lemon, one of Aotearoa’s most regarded selectors and collectors.

An internationally renowned reggae headcase Lemon started collecting Black music since the age of 13, this veteran of the club scene was a founding member of Wellington’s Roots Foundation (with Mu & Koa of FFD). Before Roots Foundation, he presented Roots and Studio One nights in sessions like his 'All Night Reggae Powerhouse', 'Mu and Lemon's Heavy Beat', 'Rockers Sermon Peoples Sound' along with a 16 year stint on Radio Active presenting Reggae and Dance music shows.

Danny’s colourful CV includes rollerskating the length of Britain for the Save The Children fund in 1980, migrating to Aotearoa in 1981, forming Roots Foundation in 1991, running all nighter reggae radio shows during the 90s.

In 2014 Lemon lost almost his complete collection in a tragic arson attack on a storage facility - an event felt round the world in the reggae and dance record collecting community. A collection of about 9000 records and tapes, all Black Music, primarily reggae, balanced with a substantial deep house and Jazz collection.

Danny Lemon says " I don't have the resources I used to have, but since the fire I've focused on replacing essential cuts I lost as well as adding new stuff. My collection is smaller, but its honed, and more potent than ever! I'm.looking forward to bringing a selection of the highest quality tunes that have graced the dance halls of the reggae eras over the last 60 years. This'll be tasty - I aim to deliver. These tunes, whether top shelf Lovers, Rocksteady or the hardest Roots, are all built and produced for Sound System. What a great privilege it is to bring my selections to Auckland and to the Sub Depot massive! . I'm going to dish up these tunes with some proper London attitude, resplendent and complete with Dub Vendors West Ham shirt It's lemonschoice all night!"

On September 24th we will celebrate his musical obsession with Jamaican music with an all night session on the Reggae Rodeo Hi-Fi.