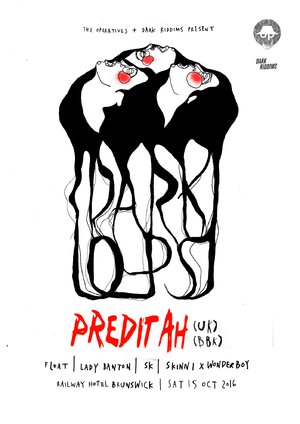 The only light in the room is the green lit-up dial of the Stereo Record player. Click as the record goes off. He walks over and flips the record, presses play, the room shakes, the Dark Ops are coming.

Nathan Gerald, better known as Preditah is a Garage/Grime music composer, DJ & Bassist from Birmingham, England. Thanks to His orchestral, melodic head-banging music, He is now one of the most recognisable names and faces in Grime – a poster boy, even.

With Six instrumental EPs under his belt (Solitaire EP, Eightsome EP, Circles EP, Red Bull EP, Gears of Grime, El Futuro EP) and a ton of remix work as well, it’s quite impossible to listen to the radio or go out clubbing without hearing one of his tracks blazing through the airwaves or tearing down a dance-floor.

Preditah’s breakthrough track was ‘The Big Wok’ which was noticed by JME (Boy Better Know). Once he started screaming his name, it wasn’t long until the rest of the UK music scene and beyond witnessed just how talented Preditah is. He’s undoubtedly most popular track to date is entitled Circles which is the main track of he’s ‘Circles EP’

As well as producing music, Preditah is also known to be an awesome DJ. He has been busy traveling up and down the UK and Europe showing clubs and promoters that he is just as good a DJ as he is a music composer. All in the space of a year, Preditah had mixed for Boiler Room, appeared on the cover or RWD Magazine, graced the pages of Mixmag, and toured around Europe. Things are looking extremely promising for the Birmingham beatsmith.