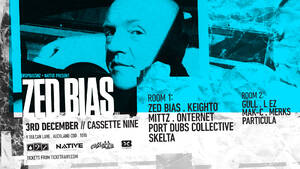 “For well over two decades, shattering stylistic standards has been his trademark, as he builds on whatever base takes his fancy – house, UK garage, dancehall, funk, broken beat, dubstep, dub reggae and so on – then shifts that particular piece of music into areas that are never less than surprising. Zed is incapable of doing it any other way, as he believes such perpetual motion is a natural by-product of today’s studio environment that positively encourages new ideas and the overturning of convention.” Lloyd Bradley, author of “Bass Culture : When Reggae was King” and “Sounds like London : 100 years of Black Music in the Capital”. Dave Jones, better known as ZED BIAS, is a MOBO Nominated Music producer, arranger, remixer, guest lecturer, and DJ, based in Manchester, UK. Early in his career, Bias released a flurry of well received tracks, such as “Strong Enough to Survive”, “All night Jam”, ”Standard Hoodlum Issue”, “Crazy” by 7 Wonders, “Been here before” and “In your mind”. Zed Bias is best known for his single “Neighbourhood” which reached #25 in the UK Singles chart in July 2000, on LOCKED ON / XL recordings. The track created a large underground response from late 1999 in its original version, which was recently included in the soundtrack of the 2021 movie “People Just Do Nothing : BIG IN JAPAN”. The song, featuring the vocals of MC Rumpus and Nicky Prince, is still widely regarded as a UKG Anthem. From the start of his career, continuously until present day, Zed Bias has been engaged in remixing duties for a huge number of well known artists. Naming just a few of over two hundred artists he’s remixed for, are Whitney Houston, Slum Village, Pharaohe Monch, Missy Elliot, MJ Cole, Sticky, Tubby T, Roy Davis Jr, Steve Arrington, C+C Music Factory, Sa-Ra Creative Partners, Gabrielle, Arthur Baker, Joey Negro, Omar, The Streets, Disclosure, Jessie Ware, Matt Bianco, Riz MC, Rita Ora, Azymuth, Chakademus and Pliers, Example, Chase and Status, Ms Dynamite, Mary J Blige, De la soul, Karen Harding, DJ Zinc, and more recently, Bad Boy Chiller Crew, Secret Night Gang and DJ Luck & MC Neat have all had the Zed treatment. Bias’ releases, which explore a more experimental or progressive side of the 2 step garage sound (sometimes described as ‘dark-swing’) have been hailed as a crucial element in the establishment of Dubstep, as a definable sound or genre. He was one of the original resident DJ’s at the infamous club, FWD>>, the East London birthplace of Dubstep culture. Since then Bias has toured the world both as a DJ and a guest lecturer for Red Bull Music Academy.