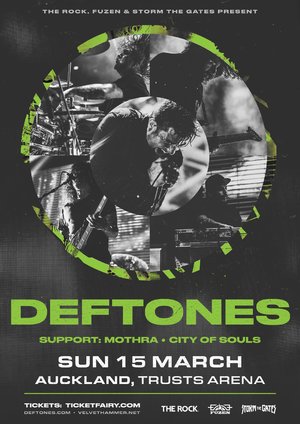 The Rock + Fuzen + Storm The Gates are teaming up to bring one of the world's most ICONIC rock bands to Auckland...

The secret is out! One of the World’s most iconic rock bands is coming to New Zealand.

Deftones will perform a one-off concert in Auckland this March.

Presented by Fuzen, Storm The Gates and The Rock, Deftones will play at Trusts Arena on Sunday, March 15. Tickets are on public sale 9.00am on Thursday, January 16 from Ticketfairy.com.

Spark customers and those who pre registered for the event will have the first shot at securing tickets with a 24-hour exclusive pre- sale starting 9.00am Wednesday January 15 until 9.00am Thursday January 16.

It is the first time the Californian alt-rockers have played in New Zealand since their triumphant mainstage set at Big Day Out in 2014.

The multi-platinum Grammy Award-winning Deftones have sold more than 10 million records worldwide since they formed in Sacramento in 1988. Made up of Chino Moreno [vocals, guitar], Stephen Carpenter [guitar], Frank Delgado [keys, samples], Abe Cunningham [drums], and Sergio Vega [bass], Deftones distill movements of cinematic rock, psychedelia, and shoegaze into an inimitable sound independent of boundaries. Skating past genre lines, they remain cited as one of rock’s most influential and impactful acts.

Not to mention, they curated, launched, presented, and headlined their own festival,

Dia De Los Deftones, in 2018. Selling out both installments to date, the eclectic line-ups hosted everyone from Future and CHVRCHES to Gojira and Megan Thee Stallion.

Fuzen, Storm The Gates and The Rock presents: Deftones