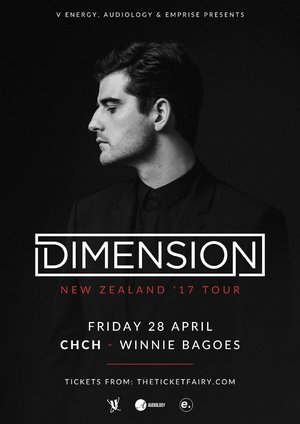 Dimension, real name Robert Etheridge, is an electronic music producer and DJ from London, United Kingdom. A man of few words who tends to let his music do the talking, Dimension is receiving mainstream success without deliberately releasing crossover music – striking the perfect balance between club and radio. Not only the creative mind behind his music, Dimension distinguishes himself through his passion for bold architectural design, sleek aesthetic and theological themes – this unique ethos has helped propel Dimension to establish himself as one of the most exciting, sought after producers in electronic music.

At an early stage of his career, Dimension was already turning heads within the Drum & Bass scene and specialist radio alike. A combination of effortless musicality and production prowess caught the attention of many producers and DJ’s such as Andy C, Sub Focus and Chase & Status. It was the latter that signed this young, exciting talent to their record label, MTA Records, at the end of 2014.

The rise of Dimension within his MTA tenure was nothing short of remarkable. Within the space of a year, Dimension remixed Chase & Status, Nero and Duke Dumont; released seminal underground Drum & Bass club tracks ‘Love To Me’, ‘Maschinen’, ‘Pull Me Under’, ‘Dark Lights’, ‘Panzer’ and ‘Whip Slap’ which was the best-selling Beatport Drum & Bass track of the year and reached #18 in the main Beatport Top 100 – a position usually unheard of for a Drum & Bass release - as well as claiming four #1’s in the Beatport Drum & Bass Top 100. On radio, Dimension’s club music was also leaving a mark by garnering support from the likes of Zane Lowe, Mistajam and Danny Howard, where he received three Radio 1 Dance Chart inclusions, as well as two ‘Special Deliveries’ and multiple #FirstPlayed premieres with Annie Mac.

In tandem with this support, Dimension’s tour schedule was ever increasing performing at festivals such as Glastonbury, Parklife, Creamfields, Reading & Leeds, EDC Las Vegas, We Are FSTVL, as well as touring all across Europe where he held a residency at Amnesia in Ibiza, as well as touring South Africa and Australia.

The real turning point for Dimension was in 2016 with Annie Mac claiming “this is Dimension’s strongest year to date.” Dimension released two singles – ‘Automatik’ which was Hottest Record In The World as well as #1 in the Radio 1 Dance Chart, and taking the crown of his second Hottest Record with arguably the biggest underground Drum & Bass track of the year, ‘UK’, which received unprecedented support from club and radio DJ’s across the board including Dance music stalwart, Pete Tong. Further remixes for Emili Sande and seminal electronic track, ‘Strobe’, by deadmau5, which was nominated for remix of the year, has set up 2017 as one of the most exciting years to date with an Australia & New Zealand tour on the horizon as well as another Amnesia residency confirmed and festivals such as SW4, Tomorrowland, Snowbombing, Pukkelpop and Boomtown.
TopInfluencers