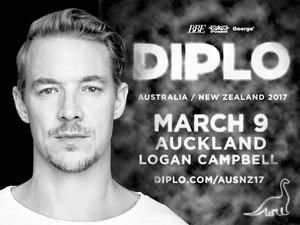 Continuing the massive success of his last two years, two-time Grammy Award Winner and Billboard's 2016 Dance Artist Of The Year, DIPLO, is returning to New Zealand shores this March for a HUGE headline show.

As the most dynamic force in music today, DIPLO—aka Thomas Wesley Pentz—has unequivocally proven himself to be a ubiquitous cultural figure, consistently bridging high and low, mainstream and underground, with remarkable tact and reverence. Through his illustrious solo productions for Beyoncé, Madonna, Justin Bieber and more, collaborative projects Major Lazer and Jack Ü and label/culture lab Mad Decent, DIPLO is one of the most sought-after artists and producers in the world.

With a host of accolades and achievements to his name, including that Major Lazer's global smash-hit “Lean On” is the most successful independent song of all time — with over 1.75M copies sold and 2.67 BILLION streams to date. The worldwide superstars’ latest release, “Cold Water” featuring Justin Bieber and MØ, recently reached #1 on US radio charts and continues to top charts worldwide.

After a 10+ year touring history, March 2017 will see DIPLO performing his biggest headline show in New Zealand to date.